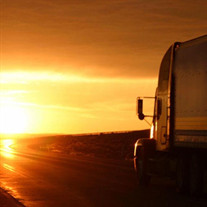 Derek Frey, 50, of Clara City, passed away Monday, May 31, 2021 in Montevideo. A Memorial Service will be held on Wednesday, June 23, 2021 at 2:00 PM at The Refuge Church in Montevideo with visitation one hour prior the service. Derek Matthew Frey was born August 11, 1970, the son of Leslie and Judith (Thomsen) Frey in Montevideo, Minnesota. He went to school and graduated from Montevideo High School on June 3, 1989. Derek also became a father in 1989 to his son, Cody and later he welcomed his daughter, Brooke to his life. Derek worked as a millwright for the sugar beet cooperative in Renville, Minnesota and was an accomplished welder. In 2008, due to a back injury, he went back to college in Minneapolis, but soon returned “home.” Derek decided to drive truck attending the program in St. Cloud and excelled! He began hauling loads all over the lower 48 states. Derek loved driving and being on the road. His eyes would light up when he would share a story of his travels. Derek enjoyed fishing and anything with a motor, he loved to push the boundaries while riding his ATV, motorcycle and snowmobile. He had a heart for others and truly cared; he always helped people out. Derek had a deep love for animals and especially cherished his canine companions, Rollbert, Tucker and Baxter. Derek is survived by his son, Cody (Elizabeth) Frey of Montevideo; daughter, Brooke (Alijah) Brown of Texas; father, Leslie (Nancy) Frey of Montevideo; mother, Judith Pearson of Arkansas; grandchildren, Konner and Pepper Frey, Hayden and Jorden Christenson, Chevy Helgeson; siblings, Wesley Frey of Beloit, WI, Geneva Miesner of Iowa, Jill Frey of Minneapolis, Jeremy Frey of Spencer, IA; as well as nieces, nephews, extended family and friends.

Derek Frey, 50, of Clara City, passed away Monday, May 31, 2021 in Montevideo. A Memorial Service will be held on Wednesday, June 23, 2021 at 2:00 PM at The Refuge Church in Montevideo with visitation one hour prior the service. Derek Matthew... View Obituary & Service Information

The family of Derek Frey created this Life Tributes page to make it easy to share your memories.

Send flowers to the Frey family.