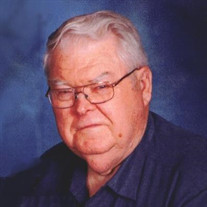 Dennis Eugene Groothuis was born May 19, 1933, in Chippewa County, Montevideo, Minnesota. To John and Inez (Underwood) Groothuis. He was baptized on May 29, 1949, with his family at home by Rev. John Walker and confirmed on April 2, 1950, at Rosewood Methodist Church. Dennis attended District #59 country school and graduated from Central High School in Montevideo in 1952. Dennis was united in marriage to Beverly Jeanette Ketelsen on October 10, 1954, at Our Savior’s Lutheran Church in Montevideo by Rev. Grant Sorenson. The couple farmed together Northeast of Montevideo until 1961 when they moved to Watson, Minnesota, and started driving for Pat Olson Truck Line. In May of 1961, Dennis went to work for Mooney’s Road Construction until 1974. Duinick Brothers from 1974 to 1984. In 1985, he became foreman at Bituminous Paving of Ortonville until 1988. Dennis also drove gas transport for Thelen Oil of Montevideo from 1988 to 1990. In 1991, he went to work for Koch Materials of Marshall until 1999. Dennis worked at Crosby Construction until he retired in 2006. He got back into the farming mode when he started helping Paul Hacker at fall harvest. Dennis was a member of the Watson Fire Department for 33 years, he was also a member of the Watson Lions Club and the IOOF Lodge. Dennis was a great and caring father, grandfather, great grandfather and wonderful, considerate husband. His family was his pride and joy, whom he loved dearly and was so glad to see them all come home. It was with family that Dennis made many special memories of camping, fishing, and snowmobiling. Dennis is survived by his wife, Beverly of 64 years; son, John (Pam) Groothuis of Watson; daughter, Joy (DeLaine) Fagen of Montevideo; four dearly loved grandchildren, Chelsie (Troy) Lueth, Shanlie (Andrew) Erickson, Jordan Groothuis, McKenzie Groothuis; his special joys, were great grandchildren, Cadynce Maree & Piper Joy Erickson, Jackson William Groothius, Cayson Joseph Groothuis, Izaya Troy Lueth, Hazel Joy Lueth; sister-in-law, Jeanine Groothuis of Colton, CA; brother-in-law, Wesley (Wanda) Ketelsen, of Maple Grove, MN; as well as nieces, nephews, other relatives and friends. Dennis is preceded in death by his father, John in 1959; mother, Inez in 2005; sisters, Delores in 1932, Beverly Aller in 1995; brothers, Darrell in 2012, Kent in 2008; sister-in-law, Geraldine Groothuis in 2015; sister-in-law, LuAnn Strommer in 2012; brother-in-law, Donald Aller.

Dennis Eugene Groothuis was born May 19, 1933, in Chippewa County, Montevideo, Minnesota. To John and Inez (Underwood) Groothuis. He was baptized on May 29, 1949, with his family at home by Rev. John Walker and confirmed on April 2, 1950, at... View Obituary & Service Information

The family of Dennis Groothuis created this Life Tributes page to make it easy to share your memories.

Send flowers to the Groothuis family.