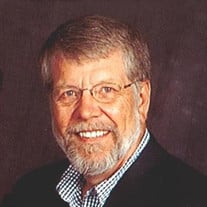 Dean Wayne Thompson, age 72, passed away on Tuesday, October 23rd, 2018, at his home, lovingly surrounded by his wife and children, after a 20 month hard fought battle with cancer. Dean was a Valentine's baby, born on February 14th, 1946, at the Montevideo Hospital, to Floyd and Frances (Torgeson) Thompson. He was baptized at home on March 5th, 1946. Dean was raised on the family farm in Milan where he grew up, made many lifelong friends, went to District 54 Country School until the 6th grade, and graduated from Milan High School. This is also where he met and fell in love with his high school sweetheart and best friend, Vonnie. They were united in marriage on December 17th, 1966, at Kviteseid Lutheran Church in Milan. Dean received his Bachelor of Arts degree in Economics at the University of Minnesota, Morris. He enlisted in the United States Army in 1969. He enjoyed and was proud to work as a Bank Examiner for the State of Minnesota for 45 years, retiring just 4 years ago. Dean's favorite hobbies included hunting and fishing, farming and woodworking with his Dad, golfing, camping, gardening and yardwork, cheering for the Minnesota Vikings and Twins, traveling, playing "Uncle Melvin" and "Freddy Krueger", watching his children and grandchildren at sporting events, countless hours playing Buck and Whist, and Sudoku puzzles. Music was such a large part of Dean's life as well. He was a member of the Chord-Ayres for numerous years and considered the members of this amazing group his second family. Family was extremely important to Dean. He would go out of his way to make Vonnie feel like she was his only care in the world and loved to tease her to no end. Dean's children and grandchildren were his heart and joy as well. He will always be remembered for his kind and generous ways and witty personality. He was thoughtful, smart and canny, and lived entirely from his heart. He was charismatic with an unforgettable bass voice and had baby blue eyes that smiled. Dean has earned his eternal rest. He fought so hard and did everything he was asked to try to beat cancer, while never complaining. We are so proud of him and know he is no longer in pain. Loved ones that will miss Dean until they meet again are his high school sweetheart of almost 52 years, Vonnie, of Montevideo; daughters, Hope (Perry) McDowell of Becker, MN, Joy (Eric) Klein of Frisco, CO, Michelle (Scott) Kindvall of Sioux Falls, SD; son, Mike (Heidi) Thompson of Lake Crystal, MN; 16 grandchildren - Cameron, Courtney, Collin, Cale, Cavin, Calleigh & Caden McDowell, Max & Grace Klein, Tyler, Hunter, Brianna & Brooklynn Kindvall, Brayden, Cole, & Isaac Thompson, and 1 great-grandchild, Madilyn Rogers. Til we meet again, may God hold you in the palm of His hand.

Dean Wayne Thompson, age 72, passed away on Tuesday, October 23rd, 2018, at his home, lovingly surrounded by his wife and children, after a 20 month hard fought battle with cancer. Dean was a Valentine's baby, born on February 14th, 1946, at... View Obituary & Service Information

The family of Dean Thompson created this Life Tributes page to make it easy to share your memories.