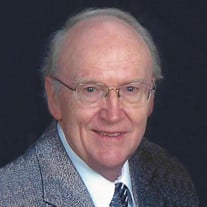 David Clark Hampton, 85, of Waverly, passed away on Monday, October 5, 2020, at Luther Haven Nursing Home in Montevideo, MN. Dave was born on November 25, 1934, at his parental home in Mason City, Iowa, the son of Frederick Orval Hampton and Ruth Edith (Trafton) Hampton. He was baptized December 9, 1945 and confirmed April 10, 1949, at Our Savior's Lutheran Church in Mason City. Dave graduated from Mason City High School in 1952 and was active in vocal music, drama and speech. He received his Associate of Arts degree from Mason City Junior College (now NIACC) in 1954 and completed a bachelor's degree in chemistry at St. Olaf College, Northfield, Minnesota, in 1956. On August 3, 1957, Dave was united in marriage to Carolyn Lois Enderson at Our Savior's Lutheran Church in Mason City. Dave and Carolyn lived in Warren, Minnesota, where Carolyn taught high school and Dave commuted to Grand Forks, completing his Master of Science in Chemistry at the University of North Dakota in 1958. The couple then moved to West Lafayette, Indiana, where Dave was a teaching assistant and a research fellow in the Department of Chemistry, Purdue University, completing the Doctor of Philosophy in Chemistry degree in 1963. Dave taught one year (1961-1962) at Luther College as a sabbatical leave replacement appointment, and then accepted a tenure-track position in chemistry at Wartburg College in Fall of 1962. Dave was a dedicated teacher of Chemistry at Wartburg where he held the rank of Professor and served as Chairman of the Department of Chemistry for 30 years. During his professional career Dave served as President of the Midwestern Association of Chemistry Teachers in Liberal Arts Colleges, Chair of the Iowa Section of the American Chemical Society, President of the Wartburg Chapter of the AAUP, and member of the Board of Directors of the Iowa Academy of Science. Dave held postdoctoral research appointments at Oregon State University, Indiana University, and in the NASA-Ames Stanford University. He retired from college teaching in January 2008 after 46 years of teaching at Wartburg. Dave was an active member of St. Paul’s Lutheran Church, Waverly, Iowa, since fall of 1962, serving on the Church Council, as the Chair of the congregation twice, as Assisting Minister, and as a member of several church committees. Dave enjoyed singing and his beautiful tenor voice could be heard in St. Paul's Chancel Choir, of which he was a member for many years. Dave will be remembered for his sharp, intelligent wit and his ability to strike up a conversation with individuals and have them feel valued for who they are. Dave loved to entertain—singing and playing the ukulele, banjo, and flute. He is probably best known for his impersonation of Yogi Yorgesson, a comically exaggerated Swedish American, and his rendition of "I Yust Go Nuts at Christmas", "Yingle Bells," and “Who Hid the Halibut on the Poop Deck.” He is survived by his two sons and their wives, Philip (Brooke) Hampton, of Newbury Park, Calif., and Daniel (Elizabeth) Hampton, of Montevideo, Minn., and three grandchildren, Lukas, Aimee and Forrest who he adored. He was preceded in death by his wife, Carolyn; his brother, Jack; sister, June; and his parents. Funeral services will be held on Friday, October 9, 2020, at 10:30 a.m. at St. Paul's Lutheran Church in Waverly. Burial will follow in St. Paul's Lutheran Cemetery in Waverly. Visitation will be held on Thursday from 4-7 p.m. at the Kaiser-Corson Funeral Home in Waverly and an hour prior to the service on Friday at the church. Memorials may be directed to either St. Paul's Lutheran Church (Waverly), Wartburg College (Waverly), or Luther Haven Nursing Home (Montevideo) and online condolences for David may be left at www.kaisercorson.com. David’s funeral service will be streamed lived on Kaiser-Corson Funeral Home Facebook page. Kaiser-Corson Funeral Home of Waverly, Iowa is in charge of arrangements for David Hampton.

David Clark Hampton, 85, of Waverly, passed away on Monday, October 5, 2020, at Luther Haven Nursing Home in Montevideo, MN. Dave was born on November 25, 1934, at his parental home in Mason City, Iowa, the son of Frederick Orval Hampton and... View Obituary & Service Information

The family of David Hampton created this Life Tributes page to make it easy to share your memories.

David Clark Hampton, 85, of Waverly, passed away on Monday, October...

Send flowers to the Hampton family.