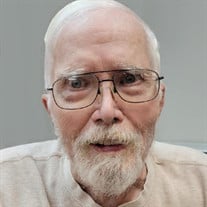 David Leroy Bestland, died Friday, January 7, 2022, at the Clarkfield Care Center, at the age of 84 years. A Celebration of life will be held on Saturday, April 30, 2022, from 11 am to 1 pm at the Wing-Bain Funeral Home Chapel, with a prayer service at 12:30pm. David was born January 17, 1937 to Rebecca and Gilbert Bestland in Granite Falls, MN. His early years were spent in Hanley Falls with his family. He was baptized and confirmed at Yellow Medicine Lutheran Church and he graduated from Hanley Falls High School in 1955. David joined the US Army out of high school. While on a ship headed to Korea, the ship changed course and took the soldiers to Germany to rebuild roads and bridges. He truly enjoyed his time in the Army and was a proud Veteran. He married Kay Martin on August 5, 1961 at Yellow Medicine Lutheran Church in Hanley Falls, MN. The couple lived in Hanley Falls and later moved to Granite Falls. Due to declining health, he became a resident of the Clarkfield Care Center in January 2018. The majority of David’s working life was spent with Mooney’s, Inc. where he was responsible for the crushing crew and snow removal. Prior to that he worked for Richter Redi-Mix. David was a lover of old farm machinery. Through the years he restored threshing machines, John Deere tractors and gas engines, with Stickney engines as his favorite. He enjoyed going to threshing and gas engine shows where he never met a stranger. He would strike up conversation with anyone, laugh and tell a story or two. David also liked carpentry and working with wood. When he built something, he built it to last. He enjoyed helping build Baptismal chests at Granite Falls Lutheran Church. And, he especially enjoyed building the perfect ‘truck’ to hold and display his many gas engines. He was a member of Granite Falls Lutheran Church, the DAV and the Pioneer Power Machinery Club. David is survived by his wife, Kay; daughter, Brenda of Pittsburgh, PA, son, Bruce (Jennifer) of Granite Falls. His grandsons: Bryant (Emma) of Mankato, MN, Shaun and Channing Bestland in Granite Falls. His sister, Phyllis Carlson of Oakdale, MN and niece, LeeAnn Bestland and nephews, David Wolfe and Jon Bestland and his dog Buttons. He is preceded in death by his parents, an infant son, brother, Virgil (Ione) Bestland, sister, Beverly (Donald) Wolfe, brother-in-law, Winston Carlson, nephews Douglas Carlson and Lynn Bestland, and his beloved dogs, Rosie 1 & Rosie 2. Shout out and abundant thanks to the staff at the Clarkfield Care Center for their care and kindness shown to David. In lieu of flowers the family requests memorials be directed to Hospice or the Yellow Medicine Lutheran East Cemetery in Hanley Falls.

David Leroy Bestland, died Friday, January 7, 2022, at the Clarkfield Care Center, at the age of 84 years. A Celebration of life will be held on Saturday, April 30, 2022, from 11 am to 1 pm at the Wing-Bain Funeral Home Chapel, with a prayer... View Obituary & Service Information

The family of David Bestland created this Life Tributes page to make it easy to share your memories.

Send flowers to the Bestland family.