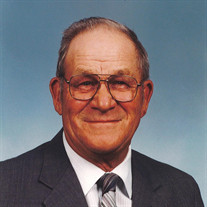 Daniel Grussing was born November 25th, 1927, in rural Clara City, Minnesota, to Eilert and Antina (Hellmer) Grussing. He was baptized and later confirmed in his faith at the Immanuel Lutheran Church. Daniel grew up on the family farm and attended country school. Daniel was drafted for World War II, but never served because the war ended, then later he was drafted again into the Korean War on September 19th, 1950, where he served his country overseas. Daniel was captured on April 23rd, 1951, and was a prisoner of war for 2 years, 4 months and 23 days. He was honorably discharged on October 12th, 1953. On February 25th, 1954, Daniel was united in marriage to Doris Gerdes at Immanuel Lutheran Church in Clara City. The couple made their home on a farm in rural Maynard and were blessed with three children, Randall, Duane, and Linnae. Daniel was a farmer and enjoyed farming with his wife and family by his side. He was a faithful member of Immanuel Lutheran Church and also a 65 year member of the American Legion Post #485 and a member of the Clara City VFW. Family was the most important thing to Daniel. He loved the annual family picnic on Games Lake and Thanksgiving was another highlight, not only for the great food and pies, but also because his family gathered together at that time to celebrate his birthday. He liked to play cards, and especially when he could teach his grandchildren the game of 52 pick-up. Another hobby of Daniel’s was to take drives around the countryside looking at the crops progress in different areas and would often find himself going to the Dakota’s to see the landscape and cattle grazing. Daniel is survived by his wife, Doris of Clara City; sons, Randall (Traci) Grussing of Maynard; Duane (Jodi) Grussing of Montevideo; daughter, Linnae (Mark) Rothmeier of Clara City; grandchildren, Robb (Caitlin Maus) Grussing of Roseville, Mitch (Brittany) Grussing of Clara City, Jordan (Stephanie) Baldwin of Dawson, Trisha (Zach Suchanek) Baldwin of Montevideo, Brianna (Anthony) Carruth of Renville, Nicole (Austin) Hansen of Cottonwood, Amber Rothmeier of Clara City, Brittany (Ben) Bergo of Granite Falls, Tyler Rothmeier of Clara City; great grandchildren, Penelope, Leo, Jackson, Ana, Olivia; siblings, Tena Tomes of Clara City, Edna Kleene of Clara City, Henrietta Hagemeyer of Clara City, Gordon (Geneva) Grussing of Clara City, Eunice (Vernon) Onnen of Willmar, sister-in-law, Margaret Ruud of Lake Lillian as wells as nieces, nephews, other relatives and friends. Daniel is preceded in death by his parents, Eilert and Antina Grussing; father and mother-in-law, Harry and Dorothy Gerdes; sister, Gertrude (Louis) Boike; brothers-in-law, Ervin Tomes, Earl Kleene, Leonard Hagemeyer, Donald “Pat” Ruud; sister-in-law, Alice (Bernard) Forcier, Lavonne Grussing. Funeral Service will be held Friday, June 29, 2018 at 10:00 AM at Immanuel Lutheran Church in Clara City with burial in the church cemetery. Visitation will take place Thursday from 5-7 PM at the church and will continue one hour prior to the service on Friday.

Daniel Grussing was born November 25th, 1927, in rural Clara City, Minnesota, to Eilert and Antina (Hellmer) Grussing. He was baptized and later confirmed in his faith at the Immanuel Lutheran Church. Daniel grew up on the family farm and... View Obituary & Service Information

The family of Daniel Grussing created this Life Tributes page to make it easy to share your memories.

Send flowers to the Grussing family.