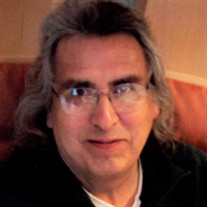 Dallas Ross, 65, of Granite Falls, passed away Monday, October 18th at his residence. Funeral services will be held on Friday, October 22nd at 1:00 pm at the Upper Sioux Community Wacipi Grounds. Due to the outside venue, it is advised to bring your own chair. Visitation will be held on Thursday evening from 5 to 7 pm at the Wing-Bain Funeral Home. Dallas Dale Ross was born February 21, 1956 to Rufus and Verna (Cavender) Ross in Granite Falls. His grandfather Alex Ross gave him the name Tatepeta Wakanmani. He attended Granite Falls High School and graduated with an Associates degree in Environmental Sciences from Vermillion Community College in Ely, MN in 1979. Dallas was united in marriage to Nancy Formo on May 21, 1977, at the Assembly of God Church in Granite Falls. Together they had two children, Joshua and Kaala. Dallas worked various jobs during his lifetime including tree trimming, truck driving, and construction. He also served his community as Tribal Chairman for 6 years and as the director of the Office of the Environment at Upper Sioux until his retirement. Dallas lived his life honoring his Dakota culture. He lived his life with Dakota values in mind and served as a mentor of our culture for many. He facilitated the repatriation of many ancestors under the Native American Graves Protection and Repatriation Act of 1990. He also served on the Medicine Wheel Coalition from 1995 until his passing. He enjoyed hunting, fishing and watching birds. Dallas was a true handyman and could fix almost anything. Together with his wife Nancy and his brothers, he built his own house where he lived until his death. Dallas with be missed greatly by his family, friends and constant feline companion, Nena. Dallas passed away at his residence on Monday, October 18, 2021. He was 65 years of age. He is survived by his wife Nancy; children: Joshua Ross and Kaala (Todd) Malone; grandson Felix Matthew Malone; siblings: Richard (Stefania) Ross, Elroy (Jill) Ross, James (Nikki) Ross, Joe (Kristi) Ross, Marlys Fluto and Candice (Charles) Hamilton and Diana Cavender; and numerous nieces, nephews and extended family and friends. He was preceded in death by his parents and three brothers: Gary Cavender, Tom Ross and John Ross.

Dallas Ross, 65, of Granite Falls, passed away Monday, October 18th at his residence. Funeral services will be held on Friday, October 22nd at 1:00 pm at the Upper Sioux Community Wacipi Grounds. Due to the outside venue, it is advised to... View Obituary & Service Information

The family of Dallas Ross created this Life Tributes page to make it easy to share your memories.

Send flowers to the Ross family.