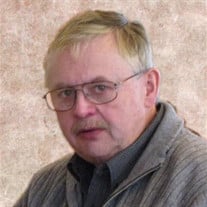 Craig Donald Schweer was born on September 20, 1945, in Mankato, MN, the son of Donald and Berneice (Johnson) Schweer. He was baptized and confirmed in the Lutheran faith and graduated from Clarkfield High School in 1963. On July 13, 1968, Craig was united in marriage to Terri Lou Simonson in Our Savior’s Lutheran Church in Montevideo. Craig graduated from Southwest State University with a teaching degree in 1971. In 1972, he and Terri moved to Australia where Craig began his teaching career. After returning from living in Australia for two years, Craig taught at the middle school in Montevideo. Later, he worked as an agriculture salesman traveling across Minnesota, South Dakota and Iowa. Craig loved to visit farms and talk with farmers about their crops, livestock and machinery. He enjoyed taking long drives during the spring, summer and fall and watching how each years’ harvest progressed. Craig had a creative spirit. He dabbled in several forms of art during his life and leaves behind many pieces of pottery, paintings and sketches for his family to enjoy. Craig enjoyed hunting, fishing, cooking, watching basketball and spending time at the family cabin on Lake Lida near Pelican Rapids. He enjoyed his trips to California and Oregon to visit Erika, and keeping up to date with his grandchildren’s activities on the East Coast. Craig was a member of the First Congregational Church in Montevideo, and he also was a lifelong member of the Chippewa County Historical Society. Craig passed away at Luther Haven nursing home on Saturday, December 22, 2018, following lengthy battle with pulmonary fibrosis and related complications. He was 73 years of age. Survivors include his children- Graham (& Sarah) Schweer of Lawrence Township, NJ, and Erika Schweer of Redondo Beach, CA; 3 grandchildren- Anna Schweer, Quinn Schweer and Ewen Schweer; 1 brother- Todd Schweer of Marshall, MN; 1 uncle- Bob (& Thelma) Schweer of Waldorf, MN; 3 aunts- Gladys Johnson of Pelican Rapids, MN, Louise Bartelt of Waldorf, MN, and Ruth Roesler of Wells, MN; several nieces, nephews and extended family. He was preceded in death by his wife, Terri; his parents; his sister, Teri McCausland; and brother, Brian.

Craig Donald Schweer was born on September 20, 1945, in Mankato, MN, the son of Donald and Berneice (Johnson) Schweer. He was baptized and confirmed in the Lutheran faith and graduated from Clarkfield High School in 1963. On July 13, 1968, Craig... View Obituary & Service Information

The family of Craig Schweer created this Life Tributes page to make it easy to share your memories.

Send flowers to the Schweer family.