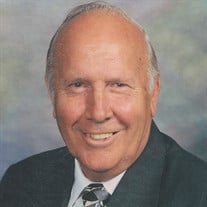 Clifton Angelus Hagemeyer was born at home near Clara City on December 10, 1931, to Henry S. and Mary K. (Bailey) Hagemeyer. He was raised on the family farm and loved the farming way of life. Clif was active in 4-H and at a young age raised a heifer he was able to show in Chicago. He was a baptized, lifelong member of the Bethany Reformed Church. He was also a 1949 graduate of the Clara City High School. Clifton enlisted in the Army and served in the Korean Conflict in the Army Security Agency. After his tour of duty, he married his sweetheart, Delores Ann Knoop, on March 13, 1954, at Bethany Reformed Church in Clara City. Together they shared 61 years of marriage. They finished his military career together in Virginia and then moved back to Minnesota where he worked for the Farmers Coop in Montevideo and Browns Valley. They returned to Clara City in the late 50s and Clif worked in the area doing carpentry and construction work. Following his father’s death, he returned to the family farm and began farming on his own in 1966. They raised their five children there and lived there well into retirement. He also spent many years as a school bus driver. Clifton served faithfully in his community. He was a member of the Stoneham Township board, the Clara City School board, and the Bethany Reformed Church consistory. He was especially pleased to be part of the education unit building project at the church. Clifton and Delores enjoyed going on many mission trips with the Pairs and Spares group from the church, generally helping people in distressed areas or following natural disasters all over the United States. As a couple, they loved to travel in the winter often camping or staying at timeshares in the South. Clif also loved spending time up north at the cabin they built near Park Rapids. Even in his later years when Guillain-Barre syndrome had robbed him of his once active lifestyle, he was content to get to the cabin, sit on the deck and enjoy nature, eat pancakes with fresh cream and fruit, and delight in his grandchildren and great grandchildren enjoying this special place. Clifton also was an avid deer hunter and fisherman--oh the stories he could tell. He was also passionate about the MN Twins and the Vikings and spent many hours these last years, cheering them on. Nicknames and catchy little phrases were also part of his witty personality. Clif passed away on Wednesday, November 27th at the Clara City Care Center at the age of 87 years, 11, months and 7 days. Clifton is survived by his children, Jim (JoAnn), Lee (Carin), David (Joanne), Julie (Don) Boonstra, Mark (Kristin); 15 grandchildren; 17 great-grandchildren; sisters-in-law, Joan Hagemeyer, Carol Hagemeyer and Beulah Abner; and many nephews, nieces and cousins. Clifton was preceded in death by his parents; His beloved wife, Delores; his twin brothers, Lesley and Wesley; and grandson, Ryan Boonstra.

Clifton Angelus Hagemeyer was born at home near Clara City on December 10, 1931, to Henry S. and Mary K. (Bailey) Hagemeyer. He was raised on the family farm and loved the farming way of life. Clif was active in 4-H and at a young age raised... View Obituary & Service Information

The family of Clifton "Clif" Hagemeyer created this Life Tributes page to make it easy to share your memories.

Clifton Angelus Hagemeyer was born at home near Clara City on...

Send flowers to the Hagemeyer family.