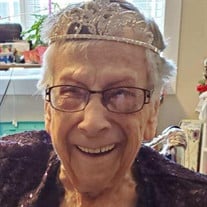 Clara Hogsven, 106, of Granite Falls, passed away on Wednesday, August 11th at the Granite Falls Health Care Center. Funeral services will be held on Tuesday, August 17th at 10:00 am at Rock Valle Lutheran Church. Visitation will be held on Monday evening from 5 to 7:00 pm at the Wing-Bain Funeral Home in Granite Falls and will continue one hour prior to services at the church on Tuesday. Clara Hogsven was born at home Oct. 6, 1914, in Sioux Agency Township, the daughter of Ludwig and Elisa (Iverson) Hogsven. She was the fourth oldest of eight children. She was baptized November 6, 1914, at Rock Valle Lutheran Church, rural Echo, Minnesota. She was confirmed in the Lutheran Church, and she attended country school District #5. Growing up on the farm taught her life-long skills. She helped with farm chores, housekeeping, baking, and babysitting her younger sisters (Orpha and Bernell). Clara remembered pulling them in a red wagon. She learned how to crochet, embroider, and knit. Many of us were fortunate to receive handmade gifts from her. She remembered losing a blue stone ring given to her by her dad, while hand milking cows. She regretted losing it. In 1929 Clara’s father passed away and in 1952 her mother. She lived with her sister Hilma and her family on their farm along the Yellow Medicine River. The nieces and nephews have fond memories of sitting quietly next to her while she fished using her handmade pole; she would sing “Catfish, take a look at that worm.” Clara was a good companion to Hilma and her brother, Leonard. Clara had a green thumb. For years she grew beautiful flowers both indoors and out. She also had pets: Chippen, her blue parakeet, and an aquarium full of fish. Later Clara began to make hats. She made hats for her nieces and sisters. They are amazing brightly colored hats made from lace, silk flowers and birds. Clara embraced life with a blend of innocence and wisdom. She faced many limitations in her life, but accepted life on her own terms, and found meaning and purpose in her family. The pure joy of her laughter was contagious, and she laughed easily. She was warm and caring of others. We admired her strong will (some would call it stubbornness), and we wished we could be as feisty. Her ability to express herself in her handiwork is something few people get to experience. Two memorable examples of the depth of her spirit were the time she took the lead and graciously prayed table grace in Norwegian; and again at her sister’s funeral when she gently leaned down to kiss Bernell on the forehead before they closed the casket. “I wanted to kiss her because she was my sister.” Clara was the oldest member of Rock Valle Church and the oldest resident of Granite Falls Care Center. She passed away at the age of 106, eight weeks short of her 107th birthday. At age 70 she did cartwheels. Clara enjoyed hymns (including “How Great Thou Art” and “Jesus Loves Me”) and praying in Norwegian. Her favorite song was “You Are My Sunshine.” She enjoyed singing, and after she finished a song she always ended the song by saying “I have a good voice.” Clara enjoyed family gatherings, especially her birthday. She is preceded in death by her parents; seven siblings and their spouses: Hilma Fossan, Inga (Olson) Wagner, Selmer Hogsven, Emma Timm, Leonard Hogsven, Orpha Nordang, and Bernell Kirschbaum; niece Marlys (Olson) Refsland, and nephews: Roger Hogsven, Harvey Timm, John Tebben, Russell Refsland, and Harlan Olson. She is survived by nieces and nephews: Lorraine Tebben, Mary Olson, Linda (Dan) Schrot, Audrey Timm, Marvin (Marlys) Timm, Donna Nordang (Joan Pilot), Karen (Michael) Metcalf, Doug (Linda) Nordang, Bonnie (Lloyd) Peterson, Kenny Kirschbaum (Jeannie Martin), Gail (Tim) Zurn, Faye Kirschbaum, Kaye (Dan) Steel, and many other relatives and friends. Each of us is a better person having had Clara as our aunt. Remember, Clara, you are our sunshine, and may your light shine brightly as you enter God’s Heavenly Kingdom, rejoicing with all the saints who have gone before you.

The family of Clara Hogsven created this Life Tributes page to make it easy to share your memories.

Clara Hogsven, 106, of Granite Falls, passed away on Wednesday,...

Send flowers to the Hogsven family.