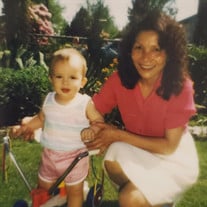 Chih-Mei "May" Bourne, 78, of Montevideo passed away Sunday, June 27, 2021, at CentraCare St. Cloud Hospital, in St. Cloud, MN. Mei was born February 19, 1943, at Jiayi, Taiwan. The eldest child of Wang-Lu and Fu-Jung Tsai, she was responsible for supporting her family from a young age and was limited to rudimentary schooling. She further endured great hardship as a young woman, with the premature deaths of her parents and a younger brother. Meeting through mutual friends, Mei married US Navy serviceman DuWayne Bourne in Taipei, Taiwan, July 25, 1980. She would then give birth to two sons, in 1981 and 1983, in Seattle, Washington. Mei and DuWayne raised their sons in Seattle, WA; Montevideo, MN; Yokohama, Japan; and San Diego, CA, before settling in DuWayne’s native Minnesota in 1992. Divorced in 2000, Mei continued living and working – at grocery stores and the Jenni-O plant – until retirement in Montevideo, MN, near her children. Despite struggling with illiteracy, language, and interpersonal challenges throughout her life, Mei nevertheless found joy in socializing, often connecting with others during bingo nights or casino visits; excelling at cooking a variety of traditional dishes, she often shared the products of her skill; and walking everywhere, she was known throughout the community for her curated appearance, friendly attitude, and giving spirit. Mei, of course, met with occasional unkindness and adversity – often, it was more difficult because of her accent, language impairments, or the xenophobia that afflicts many immigrants. This was particularly trying during the last months of her life, when utterly human loneliness and alienation were misconstrued and misrepresented, stressful injustices dealt and overlooked. She survived a heart attack June 18th, but passed away June 27th from post-operative complications following heart surgery. Overshadowing the adversity, Mei benefited greatly from the community support and friendship found in a diverse network of considerate individuals: a beautician, banking staff, community services staff, neighbors, former co-workers, and many more. From inauspicious beginnings a world away, may her enduring legacy lie in those willing to see beyond differences and difficulties – those that valued and reflected the best qualities she offered. Mei is survived by her sons, Ben and Brian. A small celebration of life will be held at Wing-Bain Funeral Home of Montevideo, Friday, July 23, from 5pm to 7pm; anyone who cared for her is encouraged to attend. Her phone will remain active through August for new voicemails recalling your relationship with Mei; fond remembrances may be mailed to: Brian Bourne PO Box 8216 St. Paul, MN 55108

Chih-Mei "May" Bourne, 78, of Montevideo passed away Sunday, June 27, 2021, at CentraCare St. Cloud Hospital, in St. Cloud, MN. Mei was born February 19, 1943, at Jiayi, Taiwan. The eldest child of Wang-Lu and Fu-Jung Tsai, she was responsible... View Obituary & Service Information

The family of Chih Mei Bourne created this Life Tributes page to make it easy to share your memories.

Send flowers to the Bourne family.