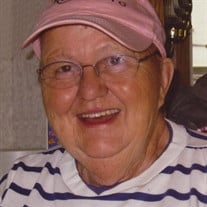 Carol JoAnn Crosby was born on October 4, 1938, the daughter of Oscar and Elnora (Anderson) Iverson in Clarkfield, Minnesota. She was baptized and confirmed in her faith at Clarkfield Lutheran Church. She grew up near and attended school in Clarkfield. Carol was united in marriage to Keith Crosby on June 25, 1955. They made their home in rural Montevideo until 2006. They were blessed with four children, Galen, Jeff, Cindy and Brenda. Carol worked at Luther Haven in the earlier years and later in life volunteered there in the hair nook. After they moved to the farm and started their road construction business, she helped Crosby Construction grow as the bookkeeper. Carol was a member of the Bergen Lutheran Church and served on the Women’s Circles. She was a member of the Montevideo VFW Auxiliary, the Red Hat Society and the neighborhood Bible study group. Carol’s favorite hobby was baking. Her coffee pot was always full and the door was always open for anyone to stop in, chat and enjoy her homemade goodies. Christmas time was her time to share her love of baking. She made a multitude of different candy, cookies, flatbread, kringla, and lefsa to name a few, and would give them away as gifts to many loved ones. Each Christmas, Carol gave a special gift of homemade goodies to her grandchildren, which they thoroughly enjoyed. Other past times include wood crafts, quilting, crocheting, playing different card games, dice, Farkel, Fast Track, fishing and camping. She cherished the many family camping trips and all the visits from her grandchildren and great grandchildren. Carol had the opportunity to take a trip to Ireland and an Alaskan Cruise, which she treasured. She had the greatest sense of humor, loved to play pranks, always had a smile on her face and held a positive outlook on the world around her. Carol is survived by her children, Galen (Debbie) Crosby of Montevideo, Cindy (Robert) Iverson of Norcross, Brenda Crosby of Sebeka; daughter-in-law, Bonnie Crosby of Montevideo; grandchildren, Amanda Dunn, Becky (Brent) Anderson, Joshua (Sarah) Crosby, Ryan (Chelsie) Crosby, Bethany Crosby (special friend, Dustin Citrowske), Lisa Iverson (special friend, Cory Amborn), Brent Hemingsen, Scott (Rita) Hemingsen, Jessica (Miles) Schoon, Elizabeth Ehrenberg (special friend, Anthony Payne), Mathia Ehrenberg (special friend, Jordan Strommer), Rhoda Kangas; great grandchildren, Emma, Karli, Caden, Henry, Camryn, Carter, Everett, Ally, Dominique, Kyrie, Lane, Hunter, Addy, Destnee, Journee, Paislee, Anders, Casen, Blake, Tobias, Astrid, Oscar, Charon, Brayden, Paisley, Tucker; brother, James Iverson (special friend, Di Ann Copp) of Willmar; sister, Esther (Gordy) Grimm of Center City; as well as nieces, nephews, other relatives and friends. Carol was preceded in death by her husband, Keith in 2002; son, Jeff in 1997; parents, Oscar and Elnora; brothers, Mayo Iverson, Wayne Iverson, Allan Iverson; sisters, Rhoda Iverson, Alice Adamson and other extended family.

Carol JoAnn Crosby was born on October 4, 1938, the daughter of Oscar and Elnora (Anderson) Iverson in Clarkfield, Minnesota. She was baptized and confirmed in her faith at Clarkfield Lutheran Church. She grew up near and attended school in... View Obituary & Service Information

The family of Carol Crosby created this Life Tributes page to make it easy to share your memories.

Send flowers to the Crosby family.