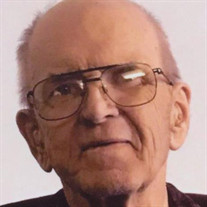 Butch Huntley, age 80, of Montevideo, died Monday, April 16th at Luther Haven Nursing Home. Memorial services will be held at 1:00 pm Friday, April 20th at the Wing-Bain Funeral Home in Montevideo. Visitation will be held Thursday evening from 5 to 7 pm at the funeral home and continue one hour prior to services on Friday. Burton John Huntley was born July 10, 1937, the son of Loren & Lillian Huntley in Hancock. He was baptized at the family farm in Cyrus with his six siblings and his parents. Butch was confirmed at the Trinity Lutheran Church in Cyrus. Following school Butch served his country in the United States Army in January of 1955. He was stationed in Germany where he served in tanks and was also a stockade guard. He was honorably discharged in January of 1958. Butch returned to Minnesota where he met Mary Telkamp at a basketball game in Hoffman. They were engaged on May 9, 1958 and were united in marriage on September 12, 1959, at the Lincoln Lutheran Church in Barrett, Minnesota. Three children were born to this union: Bart, JoLene and Troy. They moved to St. Paul where he worked for Minneapolis Moline until it closed. At that time the family moved to Montevideo in November of 1972, where they bought a house on Gravel Road. Butch started working for Goodyear. He later worked for Skip Jasperson at Block and Tile on Highway 212. Following that he worked at Friendship Homes until he retired in 2000. Butch loved to hunt and fish. Some of his favorite spots were Lac qui Parle Aitkin Lake near McGregor. Butch was also part of a coffee crew that always met at Country Kitchen. Butch passed away on Monday, April 16, 2018, at Luther Haven Nursing Home. He was 80 years of age. Butch is survived by his wife of 58 ½ years Mary; their three children: Bart, JoLene and Troy (Patty) all of Montevideo; grandchildren: Steven (Ali) Huntley of Alexandria; Kari (DJ) Huntley and Jeremy (Sam) Huntley of Montevideo, great grandchildren: Kadance, Skylar & Brody Huntley, Kingston Huntley, Jaden Hendrickson, Madden Kirking and Emma & Falon Runningen; siblings: Robert (Peggy) Huntley, Shirley (Jim) Alfson, Jerry (Marilyn) Huntley, Sandee (Jim) Bates, brothers-in-law: Harvey Weisel and Dave Larson; nieces, nephews and extended family and friends. He was preceded in death by his parents, in-laws Alice and Bud Telkamp, twin sister Beverly Weisel, sister Janice Larson, nephews: Vincent Huntley and Jordan Alfson and grandson Duncan C. Huntley.

The family of Burton "Butch" Huntley created this Life Tributes page to make it easy to share your memories.

Send flowers to the Huntley family.