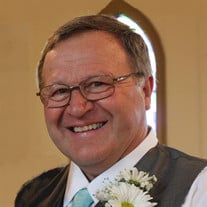 William Anthony Haff of Montevideo was born April 7, 1957, the son of Stanley & Violet (Augeson) Haff. Bill gained his heavenly Harley on Friday March 8th, 2019 when he passed, surrounded by family at the St Cloud Hospital. He was 61. Bill was outgoing, quick witted, hardworking, patriotic and the best Grandpa around. He had a loving, generous heart, a smile for everyone and likely a suggestion for your problem. He tricked many a kid (and a few adults) with his bird noise and his grandkids had him wrapped around their fingers, knowing there was nothing big, tough Grandpa wouldn't do for them. He loved to ride his Harley Davidson and enjoyed many trips with Paulette and their riding friends. One of his favorite sayings was "Knees to the Breeze" and anytime he could you would find him on his bike headed somewhere. Bill attended school in Milan and graduated in 1975. Bill was united in marriage to Gwen Norby on June 17, 1978 and to this union five children were born: Daniel, Lindsey, Lisa, Andrew and Michael. Bill was united in marriage to Paulette Sweno on October 17, 1998 and to this union he gained a daughter Kelly Sweno, who he loved as his own. Bill was a hard worker who enjoyed being outside, staying active and the agriculture field which dictated his career choices. He worked for the Palmer & Mark Lia Farm, Strand of Milan and was currently working at Cenex of Montevideo. He is survived by his wife Paulette, mother Violet Haff, children: Lisa (William) Holker of Clearwater, Mike (Ashley) Haff of Montevideo and Kelly Sweno (Mike Loucks) of Ogdensburg, New York; grandchildren: Kara & Emily Farrand and Chase Holker; siblings: Lowell (Linda) Haff of Montevideo, Kay (Dave) Teichrow of Storden and Carol (Don) Schutz of Akeley, Keith (Julie) Dalen, Beth Dalen of Milan, support team Tom & Mary Willegalle and numerous nieces and nephews and extended family & friends. He was preceded in death by his father Stanley, children: Daniel, Lindsey and Andrew, brother Robert Haff and sister Trudy Flowers, parents-in-law Ernie & Barb Dalen. Memorial services will be held at 10:00 AM on Wednesday, March 13, 2019 at Kviteseid Lutheran Church in Milan. Visitation will be held on Tuesday, March 12, 2019 from 5:00-7:00 PM at the Wing-Bain Funeral Home in Montevideo and will continue one hour prior to the services at the church on Wednesday. Memorials preferred to the Hope Lodge or the charity of your choice.

William Anthony Haff of Montevideo was born April 7, 1957, the son of Stanley & Violet (Augeson) Haff. Bill gained his heavenly Harley on Friday March 8th, 2019 when he passed, surrounded by family at the St Cloud Hospital. He was 61. Bill... View Obituary & Service Information

The family of Bill Haff created this Life Tributes page to make it easy to share your memories.

Send flowers to the Haff family.