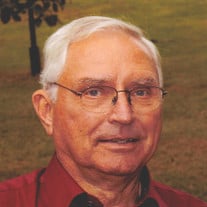 Bennie Cornelius Groen was born March 17, 1937, in Renville County, Minnesota, to Cornelius and Fanny (Ryks) Groen. He was baptized on April 18, 1937, and later confirmed in his faith on March 27, 1955, both at the Emden Christian Reformed... View Obituary & Service Information

The family of Bennie C. Groen created this Life Tributes page to make it easy to share your memories.

Send flowers to the Groen family.