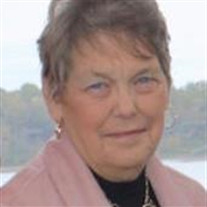 Barbara Lou Maurice was born on May 14, 1943, to Reuben and Hazel (Iverson) Schroeder. Barb grew up in Danube, Minnesota while helping out at the family business Hazel’s Café and Reuben’s Mobile Service. She graduated from Danube High School in 1961. On May 23, 1965, Barb was married to Verlin Maurice at St. Matthews Lutheran Church. The couple moved to Maynard in 1970. After graduating from beauty school in St. Cloud, Barb worked at a hair salon in Granite Falls for a few years. She spent many years working as a cook at the school in Maynard. She was an active member of the Maynard Lutheran Church helping out with the fall bazaar; alter guild, circle and sewing groups over the years. She enjoyed many hobbies and interests including baking, sewing, cross-stitching, knitting, and crafting. However, her greatest love was spending time with children, grandchildren, and great-grandchildren. Barb passed away at the age of 76 on November 12, 2019 at the assisted living center in Clara City, after a long and courageous battle with heart disease, surrounded by her family. She is survived by her daughter Cathie (Troy) Simenson of Blomkest, son Jim (Kevin Crowley) of St. Cloud and son Jay (Stacy) of Maynard; grandchildren Cody (Brooke) Simenson of Kandiyohi, Courtney (Reid Oftedahl) Simenson of Blomkest, Casey Simenson of Blomkest, Bryce Maurice of Duluth, Kelsey Maurice of Montevideo; three great-grandchildren Cooper and Cash Simenson of Kandiyohi and Tinsley Oftedahl of Blomkest; and two step-grandchildren Kenzie Riley (Kendra) and Ian Anderson of Minneapolis. She was preceded in death by her parents Reuben and Hazel Schroeder, her husband Verlin, and her oldest son Jon, along with Verlin’s parents Timothy and Helen Maurice. In Lieu of flowers please consider making a donation to Clara City Assisted Living or Rice Hospice Care in memory of both Barbara and Verlin Maurice. Funeral services will be held on Saturday, November 16th at 11:00 am at Maynard Lutheran Church.

Barbara Lou Maurice was born on May 14, 1943, to Reuben and Hazel (Iverson) Schroeder. Barb grew up in Danube, Minnesota while helping out at the family business Hazel&#8217;s Café and Reuben&#8217;s Mobile Service. She graduated from Danube... View Obituary & Service Information

The family of Barbara Maurice created this Life Tributes page to make it easy to share your memories.

Send flowers to the Maurice family.