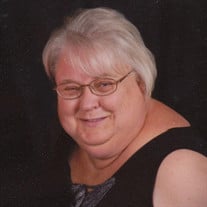 Barbara Marie (Manderscheid) Beckler was born February 21, 1954 in Olivia, MN to Jerome and Rose (Butcher) Manderscheid.  Barb attended St Aloysius Grade school and graduated from Olivia High School in 1972. She attended Hutch Tech after graduation.  She married Gregory Beckler August 24, 1974 at St Aloysius church. They were blessed with three daughters Robyn, Kelly and Amy and 9 grandchildren who were her pride and joy!  She had many different jobs throughout her life including cooking at Project Turnabout, driving school bus and working at Dumart. She worked for many years in manufacturing including Innovex and SL MTI in Montevideo. In 2009 she returned to school at Minnesota West and graduated with her Administrative Assistant degree in 2011. She worked at the Montevideo Boys & Girls club for a few years then at Western Crop Protection Services until her health forced her to retire in 2017. She enjoyed crocheting and sewing, her grandchildren were excited for their new pillowcases she would make them each Christmas with fabric matching their activities and interests from the past year. She also enjoyed quilting and was a member of the local quilt club. She enjoyed cooking and spending countless hours writing down new recipes and searching Pinterest. She enjoyed riding in the 1957 Chevy with Greg and attending car shows with Greg. One of her favorites was the Back to the 50s at the state fairgrounds. Many of the grandchildren would come with and spend the week with them. She also enjoyed going camping. A favorite place for her was the Duluth area. For many summers they would take an annual trip there and bring along the grandchildren. They all have some amazing memories to remember of those trips. She absolutely loved and adored her grandchildren. They were her world and she theirs. She enjoyed attending as many of their events as she could and it deeply pained her in the last few years when she was unable to attend their events because of her health.  Barb passed away on Thursday April 5, 2018, at the St. Cloud Hospital. She was 64 years of age. Barb is survived by her husband of 43 years Greg; her mother Rose of Olivia; brother Dave ( Donna) Manderscheid of Bird Island, MN; daughters Robyn (Dan) Aarhus of Benson, MN, Kelly (Jay) Longhenry of New Ulm, MN, Amy(Tim) Rhode of Granite Falls, MN; grandchildren Jacob, Shawn and Grace Aarhus. Zachary and Cole Rhode. Kelsey, Brady, Bryan and Ariana Rhode; step grandchildren Emma Longhenry and Josie Wagner; sisters & brothers in law, Renee Manderscheid, Charlene (Rollie) Danielson, Galen (Deb) Beckler, Jim Beckler, Annette Beckler, Sue Beckler, Scott (Jen) Beckler and many numerous nieces and nephews. She was preceded in death by her father Jerome Manderscheid; brother Dale Manderscheid and Greg's parents- Don and Dora Beckler.

The family of Barb Beckler created this Life Tributes page to make it easy to share your memories.

Send flowers to the Beckler family.