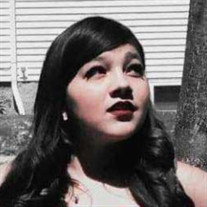 Ayla Bautista, age 21, of Montevideo, Minnesota died Wednesday, January 6, 2021, at CCM Health in Montevideo. Funeral Services will be held on Wednesday, January 13, 2021 at 2:00 PM at St. Joseph’s Catholic Church in Montevideo with burial following in the church cemetery. Walk Thru Visitation will be held Wednesday, January 13, 2021 from 12:00 Noon – 2:00 PM at the St. Joseph’s Catholic Church in Montevideo Ayla Patricia Bautista was born May 20, 1999, in Willmar, Minnesota to Jesse and Rosa (Torres) Bautista. She grew up in Montevideo and attended school there and graduated with the Class of 2017. After her schooling she worked for CAP Inc, caring for others and also worked at Casey’s. Ayla met Matthew Best in 2019 and they became fast friends and fell in love. She became a mother in October of 2020, with her “Sunshine Bear” bringing great joy to her life. Ayla was full of life! She had a big heart and a smile for everyone. Ayla loved to make people laugh but yet she wasn’t afraid to start a friendly argument just to keep things lively. She was vivacious, outgoing, fearless and had a streak of rebel. Ayla loved to draw and experiment with makeup. She enjoyed cooking, coloring, painting and dancing to her own beat. Halloween was her absolute favorite holiday, but to Ayla, any day was a great day to express herself thru what she chose to wear. Ayla is survived by her son, Silas Jason Michael Best; parents, Rosa and Jesse Bautista; boyfriend, Matthew Best; maternal grandparents, Elouise Rodriguez and Refugio Martinez; paternal grandfather, Raul Salinas; brothers, Jesse Bautista (special friend, Jennifer Perkins), Emilio Bautista, Louis Bautista, sister, Eloisa Bautista; as well as numerous aunts, uncles, cousins, other relatives and friends. Ayla was preceded in death by her paternal grandmother, Eloisa Borjas; uncle, Jason Rodriguez.

The family of Ayla Bautista created this Life Tributes page to make it easy to share your memories.

Send flowers to the Bautista family.