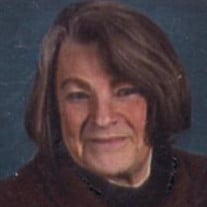 Arlyce Dolven, 73, of Montevideo passed away Saturday September 25th at the Johnson Memorial Care Center in Dawson. Celebration of Life to be held Thursday from 4 to 6 pm at the Wing-Bain Funeral Home in Montevideo. Arlyce Dolven, 73, of Montevideo, Minnesota passed away on Saturday, September 25, 2021 at Johnson Memorial Care Center in Dawson, Minnesota. A Celebration of Life will be held Thursday, from 4 to 6 pm at Wing-Bain Funeral Home in Montevideo with interment to be held at Scandia East Cemetery in Cyrus, Minnesota. Arlyce Anita Dolven was born June 29, 1948, in Montevideo, Minnesota to Arthur and Grace (Paulson) Steffenson. She grew up in Appleton and attended school there. After graduation, she began working at the Appleton Bank. Arlyce married Terry Dolven on February 3, 1968 at Kviteseid Lutheran Church in Milan, Minnesota. The couple made their home in Morris and later moved to Montevideo. Arlyce enjoyed being a homemaker while her sons were growing up and then worked for the Montevideo school in various capacities but mostly as a teacher aid in the high school. Arlyce loved to decorate. She had a knack for decorative painting and sewing. She enjoyed gardening, canning, cooking and baking. She also found playing the piano relaxing. Arlyce is survived by husband, Terry Dolven of Montevideo; sons, Shawn Dolven of Japan, Keith Dolven of Montevideo, Matthew Dolven of Faribault; grandchildren; mother, Grace Steffenson of Montevideo; sister, Julie (Gary) Boettcher of Montevideo; sisters-in-law, Diane (Ed) Gades of Canada, Ruth (Gary Kollie) Dolven of Baxter; as well as nieces, nephews, other relatives and friends. Arlyce was preceded in death by her father, Art Steffenson.

The family of Arlyce Dolven created this Life Tributes page to make it easy to share your memories.

Send flowers to the Dolven family.