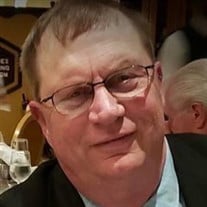 Ardell “Butch” Brouwer, 64, of Maynard, passed away Friday, November 19th at his residence, surrounded by his wife and children. Funeral services will be held on Wednesday, November 24th at 1:00pm at Bunde Christian Reformed Church. Visitation will be held on Tuesday evening from 5 to 7 pm at Bunde Christian Reformed Church. Visitation will continue one hour prior to services at the church on Wednesday. Memorials are preferred to the Clara City Ambulance Squad. Ardell “Butch” Brouwer was born August 7, 1957, the son of Arnold & Margie Brouwer, in Willmar. He was baptized and confirmed at Bunde Christian Reformed Church. He graduated from Central Minnesota Christian School in 1975. Butch went to work for Wearda Implement the following week after his graduation, and worked up until the time of his death. He joined the Clara City Ambulance Squad in May of 1978, and spent the next 42 years as a part of that team. Butch was united in marriage to Cathy Mittag on June 19, 1981, at Immanuel Lutheran Church. To this union three children were born: Ty, Tory and Tanner. Butch was very committed in every aspect of his life, from his work and customers, being on the ambulance squad and especially his family. He enjoyed hunting and watching the kids and grandkids in sporting events. He loved time spent with family and being at Scandi Lake fishing with the grandkids on the end of the dock. His farm was his baby and he took great pride in it. He also had a special place in his heart for his “fur babies”. Butch passed away on Friday, November 19, 2021, at his farm, surrounded by his wife and children. He was 64 years of age. He is survived by his wife Cathy, children: Ty (Tara) of Marshall, Tory (friend Luke) of Willmar, Tanner (Molly) of Clara City and Heewon Kim of Korea; grandchildren: Taber & Truett; parents Arnold & Margie Brouwer of Clara City; siblings: Kathy (Mark) Tammen of Maynard, Michele (Mike) Asche of Mantorville and Paul Brouwer of Clara City; mother-in-law Janyce Mittag of Clara City; brothers-in-law: Phillip (Shannon Groothuis) Mittag of Clara City and Doug (Shannon) Mittag of Willmar; several nieces, nephews and extended family and friends. He was preceded in death by his paternal grandparents Koene & Jeanette Brouwer, maternal grandparents Albert & Hilda Swart, sister Joyce Abel, grandson Lincoln Keith Brouwer, father-in-law Robert Mittag, sister-in-law Robin Folkerts and brother-in-law Richard Abel.

Ardell &#8220;Butch&#8221; Brouwer, 64, of Maynard, passed away Friday, November 19th at his residence, surrounded by his wife and children. Funeral services will be held on Wednesday, November 24th at 1:00pm at Bunde Christian Reformed Church.... View Obituary & Service Information

The family of Ardell Butch Brouwer created this Life Tributes page to make it easy to share your memories.

Send flowers to the Brouwer family.