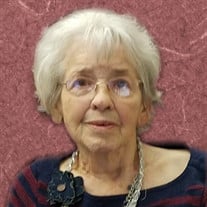 Anita Mildred Gayken, age 97, passed away on December 5, 2018, at Luther Haven Nursing Home in Montevideo, Minnesota. She was born December 12, 1920, in Pequot Lakes, Minnesota to Charles and Caroline (Sturm) Schmidgall. She attended school in Hancock, Minnesota. Anita was united in marriage to Glenn Lester Gayken on November 12, 1938. Anita was a long-time member of Our Savior’s Lutheran Church in Montevideo, being baptized and confirmed in 1947, by Pastor Gabriel Twedt. She was a member of the Claudia Bible study group, serving as secretary for many years, and a current member of Rhoda Circle. Anita lived her entire adult life in Montevideo and worked at the Swift Creamery, took a break to raise her family, then returned to work at the Montevideo American-News as a subscription clerk for 17 years, retiring in 1989. Anita was a kind and hard-working woman who enjoyed her family and spending time with her grandchildren. She embraced whatever came her way. She met life head on and looked for the good in every situation. Anita loved to laugh. Her favorite pastimes included playing Bridge and working puzzles and cryptoquips. She also loved walleye fishing with her husband. Anita felt blessed and appreciative of her time spent at Copper Glen, and later at Luther Haven, especially all of the friendships she made while there. Anita was preceded in death by Glenn, her husband of 61 years (in 1999); her parents; four brothers and eight sisters, and one grandson. Anita is survived by her two daughters, Vicki (Darrell) DeJong of Minnetonka, MN and Glennis Lauritsen of Montevideo, MN; four grandchildren, Aaron (Heidi) DeJong of Zimmerman, MN, Lindsay DeJong of Minnetonka, MN, Brock Lauritsen of Papamoa Beach, NZ, and Matt Lauritsen of Chicago, IL; two great-grandchildren, Mackenzie and Asher DeJong, sister, Doris Strom of Shakopee, MN.

The family of Anita Gayken created this Life Tributes page to make it easy to share your memories.

Send flowers to the Gayken family.