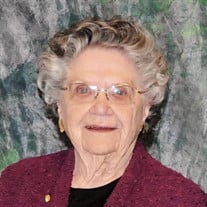 Ada Hunstad, age 88 of Montevideo, MN, passed away on Sunday, December 26, 2021 at her home. Funeral Service will be Wednesday, January 19, 2022 at 11:00 AM at United Methodist Church in Montevideo. Interment will follow at Terrace Lawn Memory Garden Cemetery. Visitation will be Wednesday, January 19, 2022 from 10:00 to 11:00 AM, one hour prior to the service at the church. Ada Mae (Jensen) Hunstad peacefully left her earthly home for her heavenly one on Sunday, December 26, 2021. Ada was born on January 24,1933 in Dundas, MN to John A. and Hilda (Johnson) Jensen. She was the 5th of 6 children. She left life the only surviving member of her immediate family, and on the day that happened to be both of her parents’ birthday. When she was a child, the family moved to Faribault, Minnesota where she graduated from high school in 1950. She met Ralph Hunstad in Faribault and they were married on November 11, 1953. In 1954 they moved to Montevideo, which became home for the rest of her life. Here they raised their four children. Randi Jean, Brian, Kent, and Todd. Ada was a stay-at- home mom until 1968 when she started working as a cook in the Montevideo school system, retiring after 27 years. Ada was a volunteer in many community organizations and at the Methodist churches in Montevideo and Ottertail. She and Ralph volunteered extensively, going wherever and whenever they were needed. They were involved with the local Seniors Citizens Center, Chippewa Village Historical Museum, Telephone Pioneers, and so many other groups. She was a Senior Queen for the Montevideo Fiesta celebration in 2000. Ada also loved to sing and used her talent for many years, singing with the group “ The Sweet Adelines”. In 1963, a vacation to Otter Tail Lake would bring a whole new chapter to the Hunstad summers. It quickly became tradition to vacation with their “lake family” at Sandy Shores resort, the last two weeks of every July. Nearly 10 years later, when the resort was being sold off, Ralph and Ada bought what is now the “Hunstad Cabin”. Many family reunions were enjoyed at that spot, their own little “slice of heaven”. It became, and still is, the favorite spot to be in the summer. They also spent 20 years wintering in Apache Junction, AZ and made many wonderful friends there as well. Ada was an extraordinary baker. Her grandchildren and great grandchildren will remember grandma’s numerous delights: cookies, bars, numerous flavored breads, pies, homemade Chex mix, and of course her lefse. Her baking helpers were often her grandchildren, who learned to make so many of her specialties. No one ever left her house without something in their hands. She truly showed her love through her baking and giving. Her baking legacy will live on for many generations to come. She loved her family dearly and taught them so many things that will be passed down through those closest to her. If she was able, there wasn’t a sporting event, concert, or recital that she would miss, supporting her children, grandchildren or great grandchildren. She was their #1 fan and they could surely hear her cheering them on! She also was a dedicated Minnesota Twins and Vikings fan, no matter the score. Ada is survived by her husband Ralph of 68 years, Daughter, Randi Jean (Warren) Van Gorp of Montevideo; Sons, Brian (Cathy) of Willmar, Kent (Gwen) of Bellingham, and Todd (Mary) of Willmar. Her Grandchildren and their spouses; Melissa Pausch, Nathan Van Gorp, Michael Hunstad, Phillip Van Gorp, Eric Van Gorp, Kristen Skodje, Brittany Hayes, Cassandra Meis, Nicole Hunstad, Janine Koopman, Bailie Flaig and Anthony Hunstad. Great grandchildren, Tyler, Alayna, Grace, Griffin, Jaida, Alex, Evan, David, Landen, Drew, Carson, Tenley, Finn, Lilyann, Braxton, Soren, Bennett, Vivian, DeAndre, Ada. A brother-in-law Richard Krenz, sister-in-law Joan Rousseau, brother-in-law and sister-in-law Duane and Avis Hunstad, and brother-in-law Howard Hunstad, along with many nieces and nephews. She is preceeded in death by her parents, two grandchildren David Van Gorp and Kayla Hunstad. One great grandchild Owen Skodje, two brothers Robert Jensen and Grant (Marilyn) Jensen and three sisters, Glady (Jordan) Walker, Elvira (John) Sitz and Lucille Krenz. Her memory will be forever in our hearts.

Ada Hunstad, age 88 of Montevideo, MN, passed away on Sunday, December 26, 2021 at her home. Funeral Service will be Wednesday, January 19, 2022 at 11:00 AM at United Methodist Church in Montevideo. Interment will follow at Terrace Lawn Memory... View Obituary & Service Information

The family of Ada Hunstad created this Life Tributes page to make it easy to share your memories.

Ada Hunstad, age 88 of Montevideo, MN, passed away on Sunday,...

Send flowers to the Hunstad family.