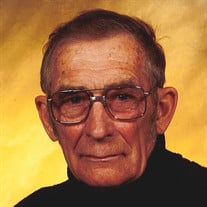 Wyman “Bud” Gale Frost was born December 2, 1933, in Atwater, Minnesota, to Victor and Myrtle (Peterson) Frost. He was baptized and later confirmed in his faith on March 23, 1947 at First Evangelical Lutheran Church in Atwater, Minnesota. Bud grew up on the family farm, enjoyed 4-H and attended school in Atwater and graduated on May 28, 1952. On July 3, 1958, Bud was united in marriage to Donna Vanderwerf. The couple was blessed with three daughters, Connie, Colleen and Caren. Bud was a phenomenal mechanic and could fix anything, he farmed and worked at various places which included, John Peterson Implement in Willmar, Westside Implement in Wood Lake, Wahl Implement in Renville, Willmar Farm Center and Immanuel Lutheran Church in Clara City. On April 28, 1989, Bud was united in marriage to Evonne Gronseth and welcomed her children, Susan, Scot, Randy and Ricky, into his life. Bud’s faith was evident in who he was, hardworking, kind, and always had time for others. He enjoyed working with his antique sawmill, restored many tractors, gardening, yardwork and also would help his neighbors and friends with their work. Bud also enjoyed music and dancing. He was a family man, who made it a priority to be at every activity of his girls. Bud is survived by his daughters, Connie (Scott) Stahnke of Spicer, Colleen Frost of Maple Grove, Caren (Bradley) Carlson of Paynesville; stepchildren, Susan (Tony Thissen) Gronseth of Raymond, Scot (Laura) Gronseth of Spicer, Randy Gronseth of Willmar, Ricky (Kellie) Gronseth of Willmar; grandchildren, Samantha (Jacob) Ailts of Aurora, SD, Ross Stahnke of Spicer, Alexander Frost of Maple Grove, Larry Carlson of Paynesville, Andrew Frost of Maple Grove, Eliza Carlson of Paynesville, Brandon Carlson of Paynesville; 10 step grandchildren; 11 step great grandchildren; sister, Darlene (Robert) Kirk of Atwater; as wells as nieces, nephews, other relatives and friends. Bud is preceded in death by his parents, Victor and Myrtle Frost; first wife, Donna Frost; second wife, Evonne Frost.

Wyman &#8220;Bud&#8221; Gale Frost was born December 2, 1933, in Atwater, Minnesota, to Victor and Myrtle (Peterson) Frost. He was baptized and later confirmed in his faith on March 23, 1947 at First Evangelical Lutheran Church in Atwater,... View Obituary & Service Information

The family of Wyman "Bud" Frost created this Life Tributes page to make it easy to share your memories.

Send flowers to the Frost family.