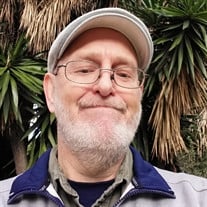 Shawn Dennis Overholser was born in Hasting, MN on October 27th, 1966 to Delores and Dick Overholser. Shawn spent most of his childhood years in Circle Pines, MN, raised in a supportive and loving home. As he grew up, he went from from a little kid running around in a Tarzan outfit to a long-haired guy on a Harley. Shawn graduated from Saint Cloud State University in July 2000 with a bachelor’s degree in history. As a lover of history, Shawn collected lots of different historical memorabilia. His various and eclectic interests were plainly on display in his Study. Shawn met the love of his life, Michelle Otto, in 1998, and they were married August 19th, 2000. During their years together, they settled down in Milan, MN and raised four daughters: Kasandra (Kodi), Maranda, Alexandra and Abrianna, and welcomed the birth of one granddaughter, Leandra Raine Berg. Shawn was an amazing husband and father. He would always put others before himself and would be the first one to help if he could. Some of his favorite pastimes were staying home with his family and watching movies together, he was also an avid reader and a lover of music. The artists that spoke to and most influenced him throughout his life were the Beatles and Jimmy Buffet. Shawn was diagnosed with Stage 4 Lung Cancer in September 2018. After receiving the devastating news, Shawn focused his time to spending with his family, granddaughter, and traveling Europe with his beautiful wife. During those travels, Shawn was able to visit Barcelona, Paris, London, and Edenborough. While in Scotland, Shawn fell in love with the country and their history. After his trip, he discovered a new passion for Scottish History, which was something he hadn’t studied before, demonstrating his love for learning and that it’s never too late to learn something new. Unfortunately, he lost his battle with cancer and passed away peacefully in his sleep on November 23rd 2019. Shawn is survived by his loving wife, Michelle; four beautiful daughters: Kasandra, Maranda (Dustin), Alexandra, and Abrianna; granddaughter, Leandra; two brothers: Del (Susie) and Jim (Kim); three sisters: Rene (Mike), Roxanne, and Denise (Randy) and sister-in-law: Pat. Also, by many nieces, nephews, other family members and friends. He was proceeded in death by his parents: Richard and Deloris, brothers: Rick, Rocky, Ronny; brother-in-law: Jim. A celebration of life will be held from 5-8 pm at Shooters Bar & Grill in Appleton, 530 W Christenson Ave, on November 26th. Family is welcomed to gathered from 4-5 pm. In lieu of flowers the family would prefer memorials.

Shawn Dennis Overholser was born in Hasting, MN on October 27th, 1966 to Delores and Dick Overholser. Shawn spent most of his childhood years in Circle Pines, MN, raised in a supportive and loving home. As he grew up, he went from from a little... View Obituary & Service Information

The family of Shawn Overholser created this Life Tributes page to make it easy to share your memories.

Send flowers to the Overholser family.