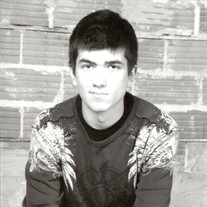 Sage Ira Cavender-Wilson, age 24, of Granite Falls, Minnesota passed away Sunday, October 31, 2021, at his residence in Granite Falls. In Keeping with Native American Culture. He will be interred in a traditional manner. In Yellow Medicine Nation Cemetery in rural Granite Falls, Minnesota. Sage’s wit and intelligence struck everyone who knew him, and though people may have liked it less when it was directed at them, we all appreciated his ability to bring a sharp eye and often acerbic humor to any situation - and made us laugh. When combined with his often-unexpected kindnesses and soft spots for people and animals, or often animals first, we were lucky to know such a singular and exceptional human being. How we will miss him. Sage Ira Cavender-Wilson, Mato Tokaheya, was Wahpetunwan Dakota and a member of Pezihutuzazi Oyate (Upper Sioux Community). He came to this world on August 1, 1997, and took his life on October 31, 2021 outside of his home in Granite Falls, Minnesota. He was 24 years old. Sage graduated from the University of Minnesota, Morris in 2019 with a bachelor’s degree in philosophy. Sage was smart - sharp strategist, and wicked card player of all types. He loved to play games, including video games, Magic, and other games where he was able to use his keen intellect and logic to whomp on his opponents. He was a critically discerning but veracious reader, especially of high dark fantasy. He loved to read and debate - where he also enjoyed whomping on those who took another side. For the past year or so he had also been getting together with his brother Talon, and friends Adam Savariego, River Jensvold, Eli Hastings, and Cayo LaBatte to play Dungeons and Dragons. They took turns cooking for each other, and of course eating, and he enjoyed that very much. Sage spent most of his life in or close to the Upper Sioux Community, except for several years as a child when his family lived in Arizona, and the years that he spent at Morris. Sage was not fond of travel, and generally stayed close to home, but in 2019 his Aunt Audrey was able to convince him to take a trip to Iceland and Scotland with her and his Uncle Randy to celebrate his graduation from college. He even enjoyed it. Sage is survived by his mother, Waziyatawin (Dennis Gill); his father Scott Wilson; his sister Autumn Cavender-Wilson (Scott DeMuth); his brother Talon Cavender-Wilson; his nephews Dacian Cavender-DeMuth (aka Steve) and Leo Cavender-DeMuth (aka Kevin); his grandmothers Edith Travers (Robert Travers) and Sonja Wilson; and grandfathers Chris Mato Nunpa (Mary Beth Faimon) and Don Wilson; aunts, uncles, and cousins and other relatives; and many friends, among them his closest friend Adam Savariego. We all knew different pieces of the whole that made Sage so unique. Sage was a private person and didn’t share easily, but he will be mourned by all who knew him.

Sage Ira Cavender-Wilson, age 24, of Granite Falls, Minnesota passed away Sunday, October 31, 2021, at his residence in Granite Falls. In Keeping with Native American Culture. He will be interred in a traditional manner. In Yellow Medicine... View Obituary & Service Information

The family of Sage Ira Cavender-Wilson created this Life Tributes page to make it easy to share your memories.

Send flowers to the Cavender-Wilson family.