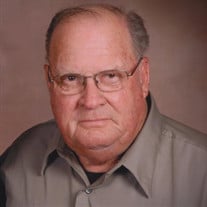 Roger Allen Gades of Montevideo, Minnesota, passed away at the CCM Health medical center on Tuesday, October 8, 2019. He lived to reach the age of 77. Roger was born September 9, 1942 in Morris, Minnesota, alongside his identical twin brother Rodney, to Herman and Anna (Carstens) Gades and spent his youth in rural Holloway. He became a Child of God at his baptism on October 4, 1942, confirmed March 25, 1956, and graduated from Holloway High School in 1960. After enlisting in the Army, Roger completed basic training at Fort Leonardwood in Missouri, and was stationed at Camp Casey in Korea with the 508th Division, US Army Security Agency, where he served as a radio operator and cryptographer (enciphering and deciphering top-secret messages). While there, he took full advantage of being stationed within a mile of his twin brother, Rodney. They enjoyed playing pranks and exchanging identities and felt especially accomplished that officers didn’t notice when Roger stood guard duty for Rodney. Roger earned many promotions and awards such as Soldier of the Month and Safe Driving Award in Korea. When he returned stateside, Roger served at Arlington Hall in Arlington, Virginia, and often enjoyed the friendship of General Breckenridge and Colonel Evan McNear and several other top officers in command at the Pentagon. He was honorably discharged in 1963. Roger went on to study accounting at North Dakota State School of Science and went to work with Swift and Co. in Montevideo. He served as a loan officer and collection agent at Associates Finance Company and then First National Bank. His experiences as a collection agent resulted in many fascinating and comical stories to share. On June 20, 1964, Roger married Marlene Schaefer in Hancock, Minnesota. They shared 55 years of marriage and raised four loved and adored children: Eileen, Gary, Jonell, and Allen. Roger had a passion for farming and a love for the land. This was evident through his work: operating a livestock farm during the 70's, working in farm equipment sales at Moon International and Kibble Equipment, and then establishing a crop farming business in the early 80's, which continues today. Roger deeply cherished his family and friends, and enjoyed living life to the fullest. His soft heart and joyfulness shined brightly when spending time with his grandchildren and favorite grand-dog, Fritz. He was an excellent marksman and demonstrated his talent during annual hunting trips. He enjoyed fishing, baseball, football, and time spent year-around at their home on Lake Ida in Alexandria. He also took pleasure in clearing out snowbound driveways in the early hours of our cold Minnesota winter mornings. Roger will be remembered for his humor, colorful communication style, and bringing a multifaceted richness to the lives of many. Roger is survived by his wife, Marlene; children Eileen (and Tim) Burgess of Danvers; Gary (and Melanie) of Montevideo; Jonell (and Scott) Lay of Wake Forest, NC; Allen (and Tera) of Montevideo; five grandchildren, Mason, Livia, Tyler, Evan, Levi, and a favorite grand-dog Fritz.  He is survived by one sister, Lyndell Lindahl of Morris and one brother, Gerald (and Kris) of Leon, West Virginia; sisters-in-laws: Shirley, Phyllis and Sharon Gades; sister-in-law, Vernell Lea, brother-in-law, Dennis (and Dietra) Schaefer; many nieces, nephews, cousins and friend. He was preceded in death by his parents, brothers Rodney, Wilbert, Ronald and Norlen; and sister, Margorie Reuss. Funeral service will be held Monday, October 14, 2019 at 10:30 AM at St. Paul's Lutheran Church in Montevideo. Interment will follow in Sunset Memorial Cemetery. Visitation will be held Sunday, October 13, 2019 from 5:00 – 7:00 PM at St. Paul's Lutheran in Montevideo and will continue one hour prior to services at the church.

Roger Allen Gades of Montevideo, Minnesota, passed away at the CCM Health medical center on Tuesday, October 8, 2019. He lived to reach the age of 77. Roger was born September 9, 1942 in Morris, Minnesota, alongside his identical twin brother... View Obituary & Service Information

The family of Roger Gades created this Life Tributes page to make it easy to share your memories.

Roger Allen Gades of Montevideo, Minnesota, passed away at the...

Send flowers to the Gades family.