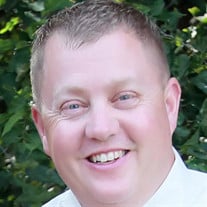 Matthew Lloyd Kling, one of the world's most funny and loving men, died in a car accident on the morning of Wednesday, February 7, 2018. Elliott and Elayna, ages 8 and 6, respectively, lost their teddy bear of a father and Matt's wife, Heather, lost her Prince Charming. Matt was born on September 2, 1973 in Granite Falls, MN to Wayne and Lou Anne (Beito) Kling. He was the seventh and last kid in the family and was forever the baby brother (with a true forever baby face to match!). Matt grew up on the family farm and his extreme work ethic was learned while working alongside his father and brothers while taking care of the livestock and fields. Matt graduated from Granite Falls - Clarkfield High School in 1993. After high school, he worked at the Hanley Falls Elevator until he followed his love to St. Paul in 1999. Matt and Heather Richter were married on May 26, 2001 at Memorial Park in Granite Falls, with his lady arriving in a horse drawn carriage and all! They lived in St. Paul until settling in Lonsdale in 2002. In 2007, he used his talents to build his family their home near Millersburg. Matt put his blood, sweat and laughter into building some of the finest buildings in the Twin Cities metro area with Opus Construction. He was a proud member of the Construction & General Laborers' Local 563 Union. Matt woke up before dawn to make sure he got to work early and stayed as long as they needed him, no matter the weather. He was always willing to help out friends or family with any project they may have be it a patio, tiling, you name it! His knowledge and skill knew no bounds, he was a man of many talents. Though Matt gave his all at his job, it was clear that his first priority was his girls - Heather, Elliott and Elayna. He was their cook, chaufer, and butler. Anything for his ladies. They loved to spend time together as a family and enjoyed many wonderful outings to the local county fairs, parks, rodeos, and Boonies! He was a talented cook and grillmaster and even though he was the baby of the family, he and Heather were in-charge of the house at family gatherings. Social didn't begin to describe Matt. He could find something in common with everyone and made a friend wherever he went. He had a spontaneous, quick wit and a laugh that was infectious. He loved to spend time back home in Granite Falls with his friends and family and enjoyed many fun trips with his wife and friends. Matt is survived by his wife Heather Richter-Kling of Lonsdale, MN and his daughters Elliott and Elayna. He is also survived by his father Wayne Kling of Granite Falls, MN and six siblings; Carrie (Larry) Anderson of Westbrook, MN, Shari (Ron) Kottke of Walnut Grove, MN, Butch (Pam) Paskewitz of Santa Rosa Beach, FL, Susan (Doug) Westbrook of Onalaska, WI, Michael (Tracey) Kling of Lewisville, TX and W. Mitchell (Carlee) Kling of Granite Falls, MN. Also surviving him are his in-laws, Bob and Margot Richter, brother-in-laws, Nick (Abbey) Richter and King (Shawna) Richter, all of Granite Falls, MN. Also mourning are many nieces, nephews, uncles, aunts and cousins. He was preceded in death by his mother, Lou Anne Kling, and grandparents Henry and Delilah (Day) Kling and Lloyd and Alta (Halvorson) Beito. IN LIEU OF FLOWERS, FAMILY REQUESTS MEMORIALS

Matthew Lloyd Kling, one of the world's most funny and loving men, died in a car accident on the morning of Wednesday, February 7, 2018. Elliott and Elayna, ages 8 and 6, respectively, lost their teddy bear of a father and Matt's wife, Heather,... View Obituary & Service Information

The family of Matthew Kling created this Life Tributes page to make it easy to share your memories.

Matthew Lloyd Kling, one of the world&#39;s most funny and loving...

Send flowers to the Kling family.