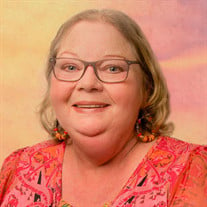 Mary Saathoff, age 63, passed away peacefully Wednesday, April 17, 2019, at the Chippewa County Montevideo Hospital in Montevideo, Minnesota. Mary Yvonne Dack was born on January 11, 1956, the daughter of Dale and Darlene (Grams) Dack, in Montevideo. She was baptized and confirmed in her faith both at United Methodist Church in Montevideo. Mary graduated from the Montevideo High School with the class of 1974. Mary was united in marriage to Douglas Saathoff on May 20, 1977. They made their home in Clara City where Doug was from and they were blessed with a son, Wade. Mary worked as a nursing assistant for over 25 years at the Clara City Care Center. After Doug passed away on January 28, 2010, Mary moved back to Montevideo and enjoyed working at Valentino’s getting to know her customers there. Mary loved to garden especially growing vegetables. She found much joy in sharing her garden’s produce with others. Mary enjoyed canning, cooking and playing cards. She loved to go fishing with her family and loved it even more if she caught the first fish and the biggest. Mary had the heart of a caregiver and was always willing to help. She will be remembered for her selflessness and kind, giving nature. Mary is survived by her son, Wade (Dawn Evensvold) Saathoff of Lake Crystal; brothers, Dan (Deb) Dack of Montevideo, Bill (Sue) Dack of Montevideo; sister-in-law, Evon “Susie” (Lowell “Pudge”) Ward of Montevideo; nieces and nephews, Josh (Beth) Dack, Chad (Nikki Forstrom) Dack, Erik (Lyndsae) Dack, Jesse (Questa) Dack, Nicole (Kevin) Gervais, Matthew Dack, Kelly Hemingsen, Jason Ward; great nieces and nephews, Cooper, Brody & Jase Dack, Peyton & Elliot Dack & Evelyn Forstrom, Thea Dack, Christian, Anthony & Jenece Schoep, Briggs Gervais, Cadence Dack; as well as many friends and extended family. Mary was preceded in death by husband, Douglas; parents, Dale and Darlene Dack; great nephew, Colson Dack.

The family of Mary Saathoff created this Life Tributes page to make it easy to share your memories.

Send flowers to the Saathoff family.