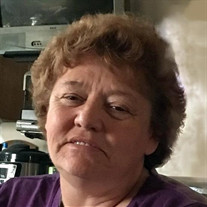 Kimberly Jayne (Johnson) Raveling was born September 11, 1961, in Minneapolis, Minnesota, the daughter of Verlin and Jayne (Olson) Johnson. Kim grew up in Milan, Minnesota and graduated from Milan with the Class of 1979. On February 14, 1981, Kim was united in marriage to the love of her life, Robert Raveling. They made their home together in Montevideo and welcomed one son, Joshua. While raising her son, Kim did daycare for others and loved to decorate cakes. As her son got older she enrolled in nursing school and upon graduating took a position at the Chippewa County Hospital, where she worked for many years until health issues forced an early retirement. Kim enjoyed multiple different jobs after the hospital and loved meeting new people. After taking a break from the employment industry she had recently just enrolled and completed schooling to become a medical transcriptionist. Kim enjoyed the simple things in life and was always there for anyone in need. She loved to spend time with her friends and enjoyed everything about the lake including fishing with her husband on the boat every chance they got. She always had a soft spot for animals, especially dogs. She could never say no to a dog in need. Every dog that she welcomed into the home was always considered family and treated with lots of love and special treats. She also loved to spend time with her grandchildren. She enjoyed the hours of long conversations she would have with them on the phone and always looked forward to the sleepovers and play days. Kim is survived by her husband, Robert, and son, Josh (Ashley) Raveling, grandchildren: Carson, Kinsley and Knox Raveling, brother Dave (Janet) Johnson, sister, Cathy (Steve) Teske, sister-in-law, Sandy Johnson, and several nieces and nephews. She is preceded in death by her parents, Verlin and Jayne Johnson, brother, Jeff Johnson, mother and father in-law Raland and Helen Raveling, aunt, Corrine Holloway and uncles, Dean Olson and Dennis Olson.

Kimberly Jayne (Johnson) Raveling was born September 11, 1961, in Minneapolis, Minnesota, the daughter of Verlin and Jayne (Olson) Johnson. Kim grew up in Milan, Minnesota and graduated from Milan with the Class of 1979. On February 14, 1981,... View Obituary & Service Information

The family of Kimberly Raveling created this Life Tributes page to make it easy to share your memories.

Send flowers to the Raveling family.