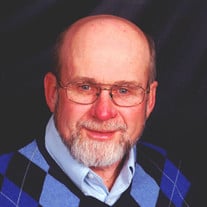 James Rayburn Erickson was born in Willmar, Minnesota, on January 22nd, 1950 to his parents Rayburn and Ione (Christiansen) Erickson. He was baptized and confirmed at Svea Lutheran Church in Svea, Minnesota. Jim graduated from Willmar High School in 1968 and two years later enlisted to serve his country at the age of 20. After serving 3 years in the United States Navy on the USS Dixon, he was honorably discharged on November 23, 1973 and went to vo-tech school in Granite Falls, Minnesota. After receiving his education in welding Jim was employed with Martin Marietta (The Green Company) where he worked 41 years. Jim, confirming himself as bachelor; vacuumed once a year with a shop vac, ate chicken with Frog using yellow fuzzy gloves and showered with one bath towel, he was living life to the fullest. Luckily, he married his wife, Darlene Erickson on June 2, 1990 at the Granite Falls Lutheran Church. They were married for 28 years. Jim was known as Uncle Jimmy or Grandpa Jim by all who met him. He spent a lot of time with grandson, Ryan making knives, forts and preparing for the Zombie Apocalypse. Jim’s duties also included showing great nephews and niece, Jayshawn, Jakai and Jade, the rules of the farm. He had also perfected the Rosette recipe passed down from his mother. In 2015, Jim had a five way bypass forcing him to retire from the quarry. Although, he never fully retired in his mind, he helped on special projects at the quarry as well as assisted his brother-in-law, Dwayne Erickson on the farm. Jim's passions include keeping up with the four women in his life, wrangling his grandson, working on his car and trains, playing guitar, saying words like Ketchup backwards (Upketch) and taking care of the animals on the farm. Jim could always be found doing something around the farm, fixing things around the house or creating something handy the farm needed. In the winter of 2013, Jim met Scott (Jessie's future husband) and formed a bond that could never be broken. Jim is survived by his wife, Darlene Erickson; children, Michelle Marthaler of Granite Falls, MN, Kristin Marthaler, Twin Cities, MN, Jessica (Scott) Karels, Big Stone City, SD; grandchildren, Ryan Brouwer and Bria Soberg; siblings, David Erickson, Sue Erickson, Laura Erickson, Sandy (Gene) East; also Jim’s honorary grandchildren, Trin and Bella Troxel of Madison, MN; as well as nieces, nephews, other relatives and many friends. He also leaves behind his four legged friends; Hank, Tory, Sammy, Karen, Jessie, Princess, Styles and Donald the Duck. Jim was preceded in death by his parents, Rayburn and Ione Erickson; niece, Lauren Larson; father and mother-in-law, Gordon and Gretchen Erickson. Also his four legged friends, Cooper, Handsome, Shasta, Buddy and Wilbur the Pig.

The family of James Erickson created this Life Tributes page to make it easy to share your memories.

James Rayburn Erickson was born in Willmar, Minnesota, on January...

Send flowers to the Erickson family.