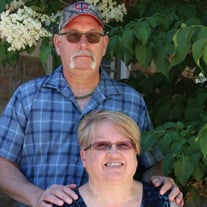 Jaime and Bonnie Surerus, of Hanley Falls, Minnesota passed away 8 days apart in January of 2022. A visitation will be held for the couple on their wedding anniversary, Saturday, May 14, 2022 at the Wing-Bain Funeral Home in Granite Falls from 1:00 – 3:00 PM with military honors at 3 PM. Burial will immediately follow at 3:15 PM at St. Paul’s Lutheran Cemetery in Granite Falls. A luncheon will be held at the Memorial Park in Granite Falls at 3:30 PM. Jaime Shane Surerus was born July 22, 1959 in Grand Forks, North Dakota to Milton and Esther Jo (Grafenstein) Surerus. He was baptized and confirmed in the Lutheran faith. Jaime grew up in Ada, Minnesota and attended school there, graduating with the Ada High School Class of 1977. He became a father to Chris and Nick. He furthered his education at Minnesota State Technical College in Detroit Lakes before enlisting in the United Sates Army. He served his country in Germany and was honorably discharged after 3 years. Bonnie Marie Schrupp was born on January 1, 1963 in Minneapolis, Minnesota to Gerald and Dorothy (Schlenner) Schrupp. She was baptized and confirmed in the Lutheran faith. Her family moved to Granite Falls in 1972. Bonnie graduated from Granite Falls High School in 1981. When Jaime returned from the service he stayed with family that had moved to the Granite Falls area and it was then that he met Bonnie. From then on, if you saw one, the other was close by. On May 14, 1988, Jaime and Bonnie were married at St. Paul Lutheran Church in Granite Falls and at that time they settled in Hanley Falls. The couple both worked at Mid Continent Cabinetry in Cottonwood for years. They did transfer to Newton, Kansas with the company for a couple years, but soon moved back to be near family and friends. After the company closed, Jaime began working for ADM in Marshall in 2018. Jaime and Bonnie enjoyed doing the same things, from fishing and hunting to gardening. They often would go up North to camp and Lake of the Woods was a favorite spot. Lac qui Parle was another frequented place to go hunting. They both enjoyed music together and appreciated the rocks from the 1980’s. Jaime was known for either his Star Wars or Pink Floyd t-shirts accompanied by a sarcastic smirk. Bonnie will be remembered for her grit and determination. Jaime passed away on January 20, 2022 at the age of 62. Bonnie passed away on January 28, 2022 at the age of 59. The couple is survived by Jaime’s sons, Chris (Cynithia) Nirschl of Moorhead, Nick (Kim) Bauman of Fargo; grandchildren, Allan Jaime and Phynix Nirschl, Christopher and Jordyn Bauman; Bonnie’s Mom, Dorothy Schrupp of Granite Falls; Jaime’s siblings, Shauna (Keith) Hildahl of Northfield, Brent (Ann) Surerus of Raymond, Brock (Victoria) Surerus of Donnelly, Brandon Surerus of St. Cloud; Bonnie’s sisters, Ann Johnson of Montevideo, Darlene (Jeff) Olson of Elk River, Glenda (Peter) Bendel of Milan, Nancy (Jason) Schmidt of Echo; as well as many nieces, nephews, other relatives and friends. They were preceded in death by his parents, Milton and Esther Jo Surerus; her father, Gerald Schrupp; Bonnie’s infant brother, Michael Schrupp; brother-in-law, David Johnson.

Jaime and Bonnie Surerus, of Hanley Falls, Minnesota passed away 8 days apart in January of 2022. A visitation will be held for the couple on their wedding anniversary, Saturday, May 14, 2022 at the Wing-Bain Funeral Home in Granite Falls from... View Obituary & Service Information

The family of Jaime & Bonnie Surerus created this Life Tributes page to make it easy to share your memories.

Jaime and Bonnie Surerus, of Hanley Falls, Minnesota passed away...

Send flowers to the Surerus family.