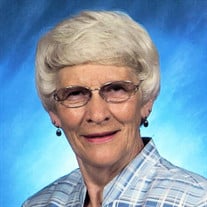 Jacquelyn Williams, age 85, of Montevideo, Minnesota passed away on Sunday, March 7, 2021, at Rosewood Assisted Living in Montevideo. Jacquelyn Susanna Williams was born November 2, 1935, the daughter of Mathew & Elizabeth (Henning) Krogman in Adrian, Minnesota. She was baptized on November 9, 1935 and later confirmed in 1948, both at St. Adrian Catholic Church in Adrian. She graduated from the St. Adrian High School in 1953, and went on to attend the North West Institute of Medical Technology in Minneapolis in 1954. Jacquelyn was employed as a lab technician for many years prior to being united in marriage to Stanley Williams on July 26, 1958, at St. Adrian Catholic Church. She also worked as a lab technician in Willmar for a number of years. Jacquelyn worked for many years at Bofferding Nursery, Hemstad’s Nursery, Donahue’s Jewelry Store and finally Innovex in Montevideo for 15 years. She spent 8 years volunteering in Hospice and was a member of the Fiesta Floral Society and Bible Study. She enjoyed yoga, swimming, walking and her book club. Jacquelyn is survived by her children, Dawn Williams of Farmington, Linda Williams of Bloomington, Douglas Williams and his wife, Carol of North Pole, Alaska, Steve Williams of Montevideo; 6 grandchildren, Derick Schuetz and Louise Tweeter of Eagan, Tyler Schuetz and Jessica Olson of St. Paul Park, Corey and Jenna Schuetz of Farmington, Elizabeth Williams of Minneapolis, Mathew and Kimberly Williams of North Pole, Alaska; great grandsons, Cooper, Chase, Mason, Miles and Maddox; sister-in-law, Cres Krogman of Houston, Texas; brother, Edward Krogman, as well as extended family and friends. Jacquelyn was preceded in death by her parents, Mathew & Elizabeth Krogman; husband, Stanley in 2014; and brother, Larry Krogman. Mass of Christian Burial and celebration of her life will be held at a later date. Should you wish to send a card at this time, please send it to Wing-Bain Funeral Home

Mass of Christian Burial will be held at a later date.

Send flowers to the Williams family.