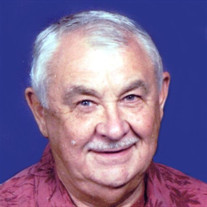 Herbert Clark Steenson, 83, of Granite Falls died Sunday, March 4, 2018 at the VA Medical Center in Minneapolis. Herbert (Herbie) Steenson was born in Montevideo on January 20, 1935 to Art and Anna (Christenson) Steenson, the youngest of two children. He was baptized and confirmed in the Lutheran Church. He attended school in Clarkfield and Montevideo, graduating from Montevideo High School in 1953. Herbie was united in marriage to Kay Johnson on September 8, 1962 at Granite Falls Lutheran Church. To this union one daughter, Kari, and one son, Chris, were born. They lived in Eden Prairie, MN until moving to Granite Falls in 1968. Throughout his life, Herbie was hardworking and resilient. During high school he chose to quit the basketball team to help support his family, working at JC Penny’s and also in farming. He served in the Army (1954-56) with the 752nd Antiaircraft Artillery Gun Battalion (90mm) as a Radar Crewman at Grizzly Peak in California, picking up additional mess hall and other duties when he could. He farmed with his brother-in-law, Curtis Johnson, before and after his time in the service. He attended technical school in Minneapolis for mechanical engineering and graduated in 1959. Ever loyal, he worked for Rodgers Hydraulic (later Victor Fluid Power) for 40 years, retiring in 1999. He had worked as a draftsman, then sales manager, traveling extensively throughout North America. Herbie believed in serving others and his community. He was a past member of the Jaycees, a charter member of the GF Lions, a member of the GF Chamber of commerce and past president. He enjoyed the unending “odd jobs” that came along with his ownership of both Jake’s Pizza and the Viking Jr. Extended Stay Motel. He finally learned how to relax when the family bought a cabin on Lake Allie in 2002. Throughout his life, Herbie enjoyed participating in a wide variety of sports. He avidly played softball into his 60’s until he couldn’t get anyone close to his age to play with him anymore. Herbie continued playing league pool with his buddies and was inducted into the C&N Pool Hall of Fame in 2014. He enjoyed watching Gopher Basketball and the MN Vikings and Twins. Most of all, Herbie was a kind, generous, empathetic, non-judgmental and hardworking man who had a heart of gold and a ready smile. He loved to laugh and to make others laugh and he loved to help people in need and lift others up to be their best. He had a wide circle of friends and family that he loved beyond measure. Herbie was a devoted and supportive husband, father, and grandfather. He was simply the best a man could be and he will be deeply missed by all who had the pleasure to know him. Herbie is survived by his wife Kay; children, Kari (Dave) Hastad of Lakeville, MN, and Chris (Lori Nelson) of Granite Falls, MN; Three grandsons Zach Hastad, Johnny Steenson and Ben Hastad. He is also survived by a niece, Cyndi (Don) Lattimore and nephew, Kurt (Patty) Johnson and their families; and by a large extended family. He was preceded in death by his parents, Art and Anna Steenson; sister and brother-in-law, Gloria and Curtis Johnson; and his mother and father-in-law, Arnold and Ann Johnson. Blessed be his memory.

The family of Herbert Steenson created this Life Tributes page to make it easy to share your memories.

Send flowers to the Steenson family.