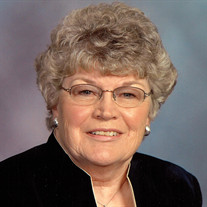 Helen Peterson, age 87, of Sauk Rapids and formerly of Montevideo passed away on December 24, 2019 at Good Shepherd Lutheran Home in Sauk Rapids. Helen was born on April 25, 1932 on a farm north of Montevideo to Carl and Ruth (Sandberg) Johnson. She grew up on the farm and attended school in Montevideo and graduated with the Montevideo High School Class of 1950. Helen furthered her education at the Minneapolis Business College and received her secretarial degree in 1951. Helen was united in marriage on July 7, 1953 to Dr. Carl “Doc Pete” Peterson. Together they became a family and settled in Montevideo until he retired in 1978 when they moved to Stuart Lake near Clitherall, Minnesota. Helen worked at various places including Honeywell, Salem Lutheran Church, Pray Associates and Brandon Tire. In 1988, Helen and Doc Pete moved back to Montevideo and she returned to work at Salem Lutheran until she retired in 2003. She was a faithful member of Salem Lutheran Church and enjoyed serving with the Salem Church WELCA and singing in the church choir. Helen was also a member of the American Legion Auxiliary and was involved in Relay For Life. Helen enjoyed creating stained glass art, quilting and was a great cook. Her family meant the world to her and they will always remember her warm, kind and gentle spirit. Helen is survived by her son, Paul (Vicki) Peterson of St. Cloud; daughter, Jan Peterson of Edina; grandchildren, Brady (Kelley) Peterson, Johanna Peterson; great grandchildren, Makenzie and Ashlyn Peterson; Doc Pete’s children, Marilyn (Warren) Hollinshead of Boston, MA, Marcia Nelson of Chaska; numerous step grandchildren and step great grandchildren; sister-in-law, Carol Johnson; as well as nieces, nephews, other relatives and friends. Helen is preceded in death by her parents, Carl and Ruth Johnson; husband, Dr. Carl Peterson; Doc Pete’s son, Ron Peterson; step grandson, Dan Nelson; brother, Robert Johnson; sister, Elaine Erickson. Memorial may be directed to Salem Lutheran Church or the Alzheimer’s Association.

Helen Peterson, age 87, of Sauk Rapids and formerly of Montevideo passed away on December 24, 2019 at Good Shepherd Lutheran Home in Sauk Rapids. Helen was born on April 25, 1932 on a farm north of Montevideo to Carl and Ruth (Sandberg) Johnson.... View Obituary & Service Information

The family of Helen Peterson created this Life Tributes page to make it easy to share your memories.

Helen Peterson, age 87, of Sauk Rapids and formerly of Montevideo...