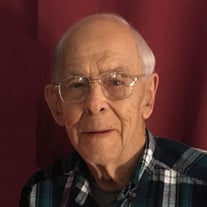 Harvey Lettau, age 94, of Raymond passed away Saturday, December 18, 2021 at Rice Memorial Hospital in Willmar. Funeral Services will be held on Wednesday, December 29, 2021 at 11:00 AM at Faith Evangelical Lutheran Church in Clara City with interment following in Raymond City Cemetery. Visitation will be held one hour prior to the service at the church. Harvey Ewald Lettau was born on March 10, 1927 in Havelock Township, Minnesota, the son of Ewald and Erna (Sonnbend) Lettau. He was baptized at Immanuel Lutheran Church in Clara City. Harvey attended school in Maynard and graduated with the Class of 1945. He worked with his father on the farm until he enlisted in the United State Army on January 19, 1952. He was honorably discharge on November 17, 1953. After returning from Korea, Harvey attended a local dance where he saw Eldean Williams and started talking to her, which was just the beginning. On December 9, 1956, Harvey and Eldean were united in marriage at Our Savior’s Lutheran Church in Montevideo. They began their life together and built a home on the Lettau family farm. The couple were blessed with four children and over 65 years together. Harvey loved farming, all of it. His hobbies were all things farming. He was a life member of the American Legion. Harvey enjoyed wood working and tinkering. He was always on the go and kept busy. Harvey remained farming until his was 80 years old and then they moved to Raymond. Harvey is survived by his wife, Eldean Lettau of Raymond; children, Cynthia Lettau of Golden Valley, Judith Ann Brielmaier of Houston, TX, Wallace (Julie) Lettau of Las Vegas, NV, Pat Lettau of Eden Prairie; grandchildren, Justin, Kelsey, Jason, Nicole, Nickolas, Jacob, Taran, Alexandrea, Kennedy, Peyton; sisters-in-law, DelRose Felton, Melvina Christ, Beverly Williams; as well as nieces, nephews, other relatives and friends. Harvey was preceded in death by his parents, Ewald and Erna Lettau; sister-in-law, Georgine and brother-in-law, Wallace.

Harvey Lettau, age 94, of Raymond passed away Saturday, December 18, 2021 at Rice Memorial Hospital in Willmar. Funeral Services will be held on Wednesday, December 29, 2021 at 11:00 AM at Faith Evangelical Lutheran Church in Clara City with... View Obituary & Service Information

The family of Harvey Lettau created this Life Tributes page to make it easy to share your memories.

Send flowers to the Lettau family.