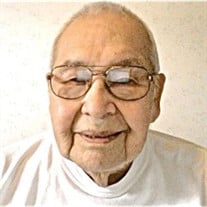 Harry Running Walker, age 94, of Granite Falls, Minnesota, departed, on April 30, 2020, on his spiritual journey on the Wanagi Tacanku, “Road of the Spirits” (the Milky Way). Caske (first born child, male), as he is known, by family and friends, was in the Hospice at the Clarkfield Care Center in Clarkfield, Minnesota. The Wake/Memorial/Visitation will be held on Tuesday, May 5, 2020 beginning at 6:00 PM at the Upper Sioux Community Multi-Purpose Building, at which the Honor Guard from Sisseton, South Dakota will be present. Military Honors to be held Wednesday at 10:00 AM by the Granite Falls Honor Guard. Caske Inyang Mani was the oldest male member, as well as the oldest member, of the community, Pezihuta Zizi Otunwe, “Yellow Medicine Community” (The Bureau of Indian affairs name is Upper Sioux Community). He was one of the last two fluent Dakota-Language Speakers, in the community, along with Tunwin (Aunt), Carrie Cavender Schommer. Harry Inyang Mani (English Name, Harry Courtney Crooks, Jr.) had two Dakota names. One, Inyang Mani, or “Running Walker”, from his mother’s side. The other Dakota name was, Wakan Ozanzan, “Sacred Light”, from his father’s side. Caske was born July 30, 1925 in Minnesota Falls Township in Yellow Medicine County. He was the son of Harry Crooks, Sr. and Elsie (Two Bear) Cavender. He attended school locally. Caske was a Veteran and served in the Korean Conflict. After military service, Harry moved to Barnesville, Minnesota and worked for a Dairy farmer for 20+ years. He returned to Yellow Medicine Community, near Granite Falls, and worked on a number of construction projects, especially grain elevators, and served as farm-hand for local farmers. He was a member of the Granite Falls Legion Post #69. Harry enjoyed playing cards, when most of the elders were still around - Flinch with his mother and other elders, and Whist with the men of the community. Harry enjoyed gardening, gambling and working jigsaw puzzles. He loved dogs and nature in general, and he liked to talk to his animals. Harry is survived by his brother, Dr. Chris Mato Nunpa and his wife, Mary Beth Faimon of the Pezihuta Zizi Otunwe; sister, Elitta Gouge of Pezihuta Zizi Otunwe; special nephew, Steve Cavender and his wife Debbie Robertson of Pezihuta Zizi Otunwe; niece, Audrey Cavender Fuller of Pezihuta Zizi Otunwe, niece, Angela Cavender (Waziyatawin) of Pezihuta Zizi Otunwe; as well as other relatives, and community friends. Harry was preceded in death by his father, Harry Crooks, Sr.; mother, Elsie Two Bear Cavender; and 5 siblings who passed on before him.

The family of Harry Running Walker created this Life Tributes page to make it easy to share your memories.