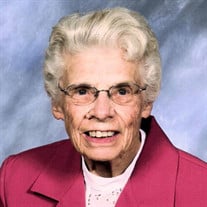 Grace Negen, 91, of Park Rapids and formerly of Clara City, Minnesota passed away on Friday, September 11, 2020 at Diamond Willow Assisted Living in Park Rapids. Grace Bertha Negen was born October 23, 1928, in Clara City, Minnesota to John and Mamie (Beckman) Hagemeyer. She was baptized and confirmed at Immanuel Lutheran Church in Clara City. Grace attended country school with her brothers. Grace was united in marriage to Gerald Negen on December 12, 1946. The couple farmed for many years until they moved to Renville in 1967. She then began working at K & M Manufacturing until her retirement in 1991. In 2013, Grace moved to Akeley, Minnesota to be near her son. In March of 2019, she moved to Diamond Willow Assisted Living in Park Rapids, Minnesota and made many dear friends there. Grace loved playing cards with friends. She enjoyed camping and fishing. Grace was also an active member of Immanuel Lutheran Church until her health declined and she moved to Akeley. Her family was very important to her and she cherished spending time with her grandchildren. Grace is survived by her son, Galen (Charlotte) Negen of Akeley; grandsons, Barry Negen of Akeley, and Byron (Jody) Negen of Mt. Iron; great grandchildren, Bryce Negen of Mt. Iron, Jordan Negen of Babbitt, Alexandra Negen of Mt. Iron, Braxton Negen of Mt. Iron; great great grandsons, John Negen and Wallace Negen; sister-in-law, Henreitta Hagemeyer of Clara City; as well as many nieces, nephews, other relatives and friends. Grace was preceded in death by her husband, Gerald; parents, John and Mamie Hagemeyer; brothers, Carl Hagemeyer, Louis (Eleanor) Hagemeyer, Leonard Hagemeyer, George (Louise) Hagemeyer. Grace’s family is most appreciative of your support and prayers.

The family of Grace Negen created this Life Tributes page to make it easy to share your memories.

Send flowers to the Negen family.