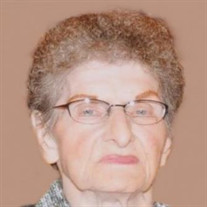 Clara Marie (Straus) Jakobs was born on October 9, 1929, on a farm northwest of Clara City MN to Nicholas Henry and Clara Margaret (Eischen) Straus. She was baptized and confirmed into the Christian Faith at St. Clara’s Catholic Church in Clara City. She grew up and attended the Catholic School until 8th grade. On June 4th, 1950, she married Earl Engel who passed away three years later. To this union a son was born. On September 9, 1958, she married Marvin Jakobs at Bethany Reformed Church in Clara City. To this union two daughters were born. The couple lived in Clara City, where Clara cared for her family and worked as a waitress in local restaurants. Clara enjoyed helping people in many ways. She was active in church, where her pride was washing and ironing the church towels. She was a member of the St. Clara Catholic Church and Legion Auxiliary. She was a devoted wife, mother, grandmother, great-grandmother and friend. Clara enjoyed baking, (chocolate chip cookies, donuts and cinnamon rolls were among her favorites), cooking and dancing in her early years of life. She enjoyed hours of word search puzzles, watching Twins baseball and Vikings football, listening to music, and playing cards, with 500 rummy being her favorite! Clara was happiest when her family was all together; even though she was a lady with few words to say. Clara is survived by her two daughters Susan Jenson of Clara City, Kristi (& Randy) Regnier of rural Maynard. Grandchildren Jacob (Laura) Jenson of Marshall, Michael (Sarah) Jenson of Clarkfield, Christopher (Jessica) Steffens, of LeMars Iowa Jason Steffens of Savage and Jason (Roxanne) Engel of Farmington. Great grandchildren Tessa Jenson and two baby “J’s in May, Lydia and Parker Steffens, Tyler, Nathan and Jayden Engel. Two sisters Susan Catherine Pflespsen of St. Cloud and Mary (Paul) Juckel of Fort Myers, Florida. Sister-in-laws Aggie Straus of Ham Lake and Mary Jakobs of Moose Lake, along with several nieces, nephews and friends. She was preceded in death by her parents; her husbands Earl in 1953 and Marvin in 1995, her son Duane (Dewy) Engel in 2002, her grandson Joshua Marvin Jarveis (son of Kristi) in 1996, brothers Steve and Joseph Straus and Sister Cecelia (Straus) Omelink. In May of 2005 she moved to the Clara City Care Center; which has been her family and home for the past 12 years. She always commented on how “great” the staff is; she enjoyed her life there. A special note of appreciation to all the staff at the Clara City Care Center for their gentle compassionate and professional care of our mother, grandmother and great-grandmother during all her years of living there. A sincere thank you for the hospice and comfort care she received during the last few days of her life. Clara passed away on Tuesday morning, November 28, 2017 at the Clara City Care Center at the age of 88 years. Blessed be her memory.

Clara Marie (Straus) Jakobs was born on October 9, 1929, on a farm northwest of Clara City MN to Nicholas Henry and Clara Margaret (Eischen) Straus. She was baptized and confirmed into the Christian Faith at St. Clara&#8217;s Catholic Church... View Obituary & Service Information

The family of Clara Jakobs created this Life Tributes page to make it easy to share your memories.

Send flowers to the Jakobs family.