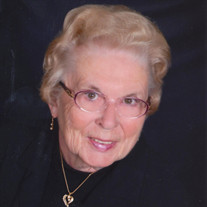 Audrey Marie Erickson, age 78, passed away peacefully Tuesday, April 16, 2019, at the Bethesada Club Suites in Willmar, Minnesota. Audrey was born on June 8, 1940, the daughter of Orville and Ethel (Johnston) Waters, in Montevideo. She was baptized on October 20, 1940 at Our Savior’s Lutheran Church in Montevideo and later confirmed in the Christian faith on April 19, 1953, at United Methodist Church in Montevideo. Audrey graduated from the Montevideo High School with the class of 1958 and continued her education by attending banking classes. Audrey was united in marriage to Russell Thompson on July 3, 1971. They made their home in rural Montevideo until Russell’s passing on January 2, 2003. Audrey started her career as a waitress, was a bookkeeper at Johnnie’s and later she began work at MinnWest Bank in Montevideo. She also worked at Friendship Homes. On November 25, 2006, Audrey was united in marriage to Maurice Erickson at United Methodist Church in Montevideo. Audrey was active in her community. She was a member of the American Legion Post #59 Auxiliary, volunteered at the Pioneer Village and at Prairie Five Rides. Audrey enjoyed traveling and treasured the memories made on the trips across the USA and other countries and also the cruises she was able to take. She loved going to the lake, dancing, and attending the activities of her great niece and nephew. Surviving Audrey are her faithful husband, Maurice Erickson, whom she so appreciated being at her side providing support and comfort following her surgery and medical treatments, even sleeping on the floor next to her bed during those difficult final days; sister, Pat Koenen of Mankato; nieces, Teresa Koenen of Mankato, Judy Koenen of Montevideo; great nephew, Brayden Bode of Mankato; great niece, Brianna Bode of Mankato; brother-in-law, Glenn Erickson of Montevideo; special friends, Sharon Mitteness, Duane (Jan) Sanow and many friends and extended family. Audrey was preceded in death by her first husband, Russell Thompson; her parents, Orville and Ethel Waters; brothers-in-law and sisters-in-law, Harold Koenen, Algean (Florence) Erickson, Glorraine Erickson; nephew, Mike Koenen. In lieu of floral arrangements, the family respectfully requests memorials be given to the American Cancer Society.

Audrey Marie Erickson, age 78, passed away peacefully Tuesday, April 16, 2019, at the Bethesada Club Suites in Willmar, Minnesota. Audrey was born on June 8, 1940, the daughter of Orville and Ethel (Johnston) Waters, in Montevideo. She was... View Obituary & Service Information

The family of Audrey Erickson created this Life Tributes page to make it easy to share your memories.

Send flowers to the Erickson family.